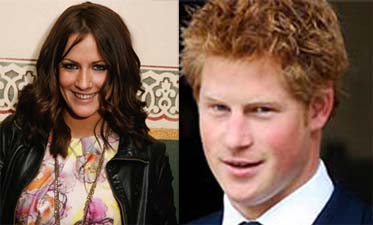 London, Apr 24 : Looks like a new love is on the cards for Prince Harry. According to reports, the royal has been swapping texts with pretty TV presenter Caroline Flack after a wild poker night.

Harry and the Gladiators host hit it off after meeting at a poker night in West London on April 17.

The duo the spent the rest of the evening chatting and giggling before exchanging numbers at midnight.

And since then, Caroline has been telling friends she felt "a little bit like Cinderella" after hitting it off with the party-loving prince.

The friend added: "And she was amused by the texts he has been sending her, asking how she was feeling after their boozy night and joking about how rubbish they both were at playing poker."

But, the pretty lass is in no hurry to get involved with the army officer as she's still pining over her ex - ex-Holloways drummer Dave Danger.

Harry, on the other hand, is also newly single after Chelsy Davey ended their five-year romance earlier this year. (ANI)