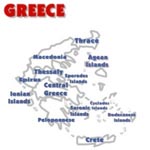 The left-wing group sent a statement to the weekly Pontiki newspaper saying it was behind two incidents last month, in which one bomb exploded outside a Citibank branch in the Greek capital while a second failed outside the city's Citibank headquarters.

In the letter, the group said it's intention was not only to attack but to also injure innocent citizens in the same manner as al- Qaeda.

The attacks followed Greece's worst rioting in decades, in December. Those were triggered by the police killing of a teenager.

Within hours of the boy's death, riots broke out across the country. Those riots were further fuelled by anger at government scandals and growing poverty.

Two years ago, Revolutionary Struggle fired a rocket-propelled grenade at the US embassy in Athens, causing minor damage, but no injuries.

The group first made itself known with a series of bombings aimed at government ministries and police within months of the 2003 breakup of November 17, another deadly terrorist group.

Revolutionary Struggle claimed responsibility for a gun attack on riot police outside the Culture Ministry, which seriously wounded a 21-year-old officer. It has also said it was behind a failed bomb attack at Royal Dutch Shell's headquarters in Athens in October. (dpa)