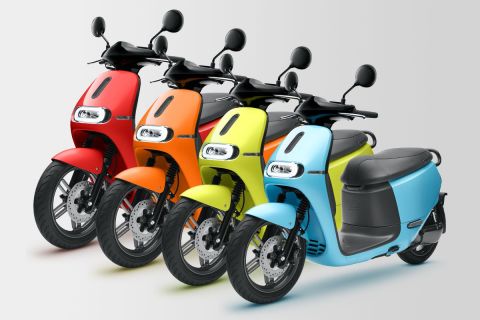 Gogoro Incorporated, Taiwan-based electric scooter maker and operator of battery swapping network, has announced the signing of a commercial partnership deal with DCJ and Yadea to expand its battery-swapping network across China.

In a recently released statement, Gogoro proudly announced that it has teamed up with DCJ and Yadea to create a new battery swapping brand, called Huan Huan, in China.

The Huan Huan battery-swapping network will first launch its battery swapping services in the city of Hangzhou, the capital of southeastern Chinese province of Zhejiang.

DCJ is currently the leading manufacturer of piston-powered two-wheelers in China; while Yadea produces the majority of electric two-wheelers roaming in the Asian country. Like any other major original equipment manufacturer (OEM) with legacies built on combustion power, DCJ is trying to shift its business to electric powertrains. It is for this very reason that it has partnered with Gogoro, and took the opportunity to unveil its first-ever electric scooter prototype, which will use PBGN technology and go on sale sometime next year. Yadea unveiled two new electric two-wheelers powered by Gogoro Network. One of the two PBGN electric models is already available in Hangzhou.

Dong Jinggui, chairman of Yadea Technology Group, said, “With Huan Huan’s launch of Gogoro’s battery swapping system in Hangzhou, we are unveiling two new vehicles as part of a larger portfolio of Gogoro-powered vehicles. Together, we are changing the future of green transportation in China and we are looking forward to expanding to several new cities in 2022.”

The partnership deals with various foreign companies will surely help the Taiwanese manufacturer in strengthening its focus on the premium electric two-wheelers and related services in foreign markets, which will enable it to further diversify its portfolio in the future.

GoGoro is expanding its reach quite fast. Earlier this year, the Taiwanese e-scooter maker announced a partnership deal with Indian manufacturing giant Hero MotoCorp, launching its unique battery-swapping service for Indian electric two-wheeler owners in April this year. Now, it has announced its partnership with DCJ and Yadea to expand its battery-swapping network in China. In addition, it is preparing to list on NASDAQ sometime in early 2022.