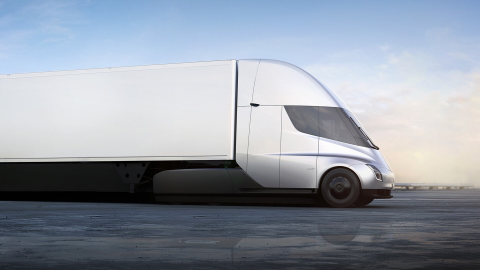 After repeated delays and years of lingering, American electric vehicle (EV) manufacturer Tesla Motors’ all-electric semi-truck “Tesla Semi” is finally about to enter the company’s production lines. At the time of official unveiling of the Tesla Semi in 2017, the Palo Alto, California-based EV giant had announced that the fully-electric commercial vehicle would like be rolled out sometime in 2019.

The company had also started accepting reservation orders from numerous businesses interested in electrifying their fleets.

But, the EV giant failed to produce and deliver the electric truck in 2019. Thus, the deliveries of the commercial EV were deferred to 2020. The manufacturer missed the deadline again due to the Covid-19 pandemic and issues like shortage of some key components, and the deliveries were deferred to 2021. Now, the EV giant seems to be in a much better situation to produce and deliver the commercial electric truck.

In March this year, some media reports claimed that Tesla was fitting its production line at Gigafactory Nevada with special equipment to produce five Tesla Semi trucks per week. Now, some people having direct knowledge of the matter have revealed that the drive axle production line and the general assembly line are ready to start production. It is one of the last steps before the commencement of production of the much-awaited electric truck.

Tesla also hinted that it has plans to use the first few units of the Tesla Semi electric trucks for its own operations, but some of the biggest reservation holders, such as PepsiCo, are also expected to receive some units of the electric truck this year.

According to information released by the Palo Alto, California-headquartered manufacturer, the Tesla Semi will come equipped with four independent motors on rear axles that provide maximum power and acceleration at the lowest energy cost per mile. It will offer a range of 300 to 500 miles with top speed of 60 mph and 0-60 mph acceleration time of 20 seconds, while fully loaded. Its autopilot software will help avoid collisions, while its centered driver position will provide maximum visibility and utmost control.