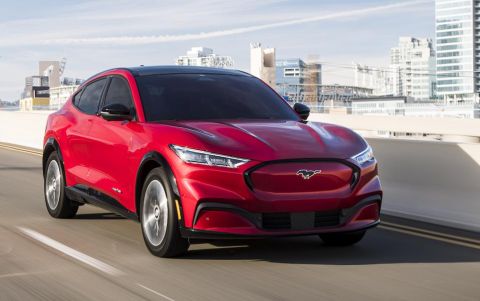 American automobile giant Ford Motor Company is producing more units of the Mustang Mach-E fully-electric crossover SUV than the conventional gas-powered Mustang. Ford recently announced that the company will put even more funding and effort in its shift to electric vehicles segment. Announcing the important milestone, Ford revealed that it built 27,816 units of all-electric Mustang Mach-E crossover SUV at its manufacturing plant in Mexico thus far this year; while only 26,089 units of the conventional internal combustion engine (ICE) Mustang were produced at its Michigan manufacturing facility.

The auto giant said in a statement, “Ford has built 27,816 electric Mustang Mach-E models at a plant in Mexico this year compared to 26,089 copies of the traditional internal combustion engine Mustang at a factory in Michigan, according to production data the automaker released Thursday.”

It is an important technical milestone for the automaker as the number of electric Mustang Mach-E SUV surpassed the number of the conventional ICE-powered Mustang just months after the first electric unit of the widely-renowned vehicle rolled off its Mexican assembly line.

However, it may not stay long as the shortage of chips might have impacted Ford’s priorities. Even Ford’s sales analyst, Erich Merkle, admitted that some models like Mustang and Flat Rock have been adversely impacted by some outside factors, such as shortage of semiconductor chips.

Demand for chips has been on the increase for the last couple of years as demand for EVs has surged worldwide. It may be noted here that chips are used in cars for everything ranging from computer management of electric motors to driver-assistance features like automatic lane changing. But almost all automakers around the globe, including Ford, have for sometime been suffering from shortage of chips.

Moreover, some are of the view that electrification of iconic models would not appeal to everyone. While many warned ford that it decision to launch the electric versions of its iconic models like Mustang could upset many fans of the brand; Ford seems to be determined to electrify its some of its most iconic models.

Headquartered in Dearborn, Michigan, Ford has plans to spend $29 billion in electric and autonomous vehicles by the end of 2025. The automaker revealed the plans to earlier this year when it reported better-than-expected earnings for the final quarter (October to December) of 2020. Out of the aforementioned amount of $22 billion, $7 billion will be invested in self-driving technologies and $22 billion in the electrification of its vehicles.