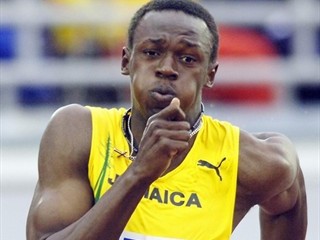 London, Apr 30 : World 100 and 200-metre record holder Usain Bolt has been admitted to hospital, following a motor car accident along the Vineyard Toll section of Highway 2000 in Jamaica.

Bolt's car had been travelling into Kingston from Clarendon when the accident occurred. The road was slippery from afternoon showers.

Bolt and a female passenger were taken to a hospital in Spanish Town, near Kingston, where the Jamaican sprinter was treated before being sent home.

Bolt's manager, Norman Peart, said the 22-year-old sustained nothing worse than scratches from thorn bushes when he stepped out of the car on the side of the road. "We are very relieved he's OK. Everybody is fine," Peart said.

Bolt is reported to have had a thorn stick him on the soft part of his left foot, after he stepped out of the car, The Guardian reported

Police sergeant David Sheriff reported that Bolt lost control of his BMW M3, a present given to him by his sponsors at Puma after his performances at the Beijing Olympics.

Bolt attended a specialist BMW M driver school at the Nürburgring in Germany last year to learn how to handle the high-performance car. (ANI)