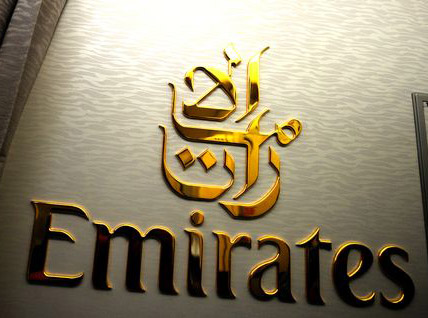 The financial year ending March 31, 2014, also marked an unprecedented level of investment across the group, continued expansion of its global footprint, and the achievement of new capacity milestones, it said.

In its 2013-14 annual report released Thursday, the Emirates Group posted a 4.1 billion dirham ($1.1 billion) profit, up 32 percent from last year. The group’s revenue reached 87.8 billion dirhams, an increase of 13 percent over last year’s results, and its cash balance remained strong at 19 billion dirhams.

"Achieving our 26th consecutive year of profit in a financial year marked by record increases in capacity and significant business investments across the Group, is testimony to the strength of our brands and our business fundamentals," Sheikh Ahmed bin Saeed Al Maktoum, chairman and chief executive of Emirates Airline and Group, said in a statement.

"Throughout 2013-14, the group has collectively invested over 22 billion dirhams, the highest amount ever in one financial year... Every dirham invested has been carefully considered against short and long-term goals - be it enhancing our capabilities, improving our product, or expanding our business footprint," he added.

The rroup also continued to invest in and expand on its employee base, increasing its overall staff count by 11 percent to over 75,000 representing over 160 different nationalities, across its more than 80 subsidiaries and companies. Revenue per airline employee increased by 4 percent to 1.9 million.

"We are moving into the new financial year with confidence, and a strong foundation for continued profitability with our strong balance sheet, solid track record, diverse global portfolio and international talent pool," said Sheikh Ahmed.

"Operating in a dynamic and highly-competitive environment means we have to stay agile, and work even harder to meet and exceed our customers’ expectations. With the help of our 75,000-strong multicultural workforce, we have no doubt that we will be able to capitalise on the opportunities in the year ahead."

Similar to the last financial year, the group declared a dividend of one billion dirhams to the Investment Corporation of Dubai.

On the cargo side, the Emirates SkyCargo’s tonnage strongly increased by 8 percent to reach a remarkable 2.3 million tonnes in a flat and challenging airfreight market, highlighting its ability to grow revenues against the industry norm. This year, freight yield per freight tonne kilometre (FTKM) decreased by one percent.

At the end of the financial year, the Emirates SkyCargo freighter fleet had grown to 12 aircraft - 10 on operating lease and two on wet lease.

Emirates’ Destination and Leisure Management, including hotels, recorded revenue of 623 million dirhams, an impressive increase of 35 percent over last year.

This positive development was supported by the first full year of operation of the JW Marriott Marquis Hotel in Dubai, the world’s tallest hotel. The second tower of the hotel will be fully operational later this year.

In 55 years of operation, 2013-14 has been most successful yet for dnata, which offers ground handling, cargo, travel and flight catering services.

dnata grew its revenue to 7.6 billion dirhams, an increase of 14 percent, through organic growth and as well as strategic international acquisitions. For the first time in the company’s history, dnata’s international business accounted for 50 percent of its revenue.