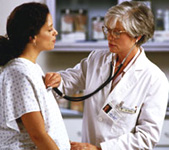 Washington, Sept 6 : A new study has revealed that a doctor's gender may hamper early diagnosis of heart disease in women.

The researchers, led by Dr Ann Adams of Warwick Medical School at the University of Warwick, used data from a large UK/US study to analyse the decision-making processes of 112 primary care doctors (56 from the US and 56 English) split equally male/female.

The doctors were shown videotapes of actors portraying patients with CHD. The patient actors, aged 55 years and 75 years, presented case histories that all contained a high number of the most significant symptoms that are universally recognized as being strongly suggestive of CHD.

Despite the fact that all the patients gave case histories that should have resulted in a clear diagnosis of CHD, the results showed that doctors were significantly less certain about the diagnosis amongst women, particularly the 55 year olds, and also differences in how male and female doctors judged the cases of male and female patients.

The key finding in the research was how the doctors approached the issue of patient age. Increasing age is known to be an important risk factor for CHD amongst both men and women.

However, many of the doctors in the study showed a clear bias in favour of male patients when considering age as a diagnostic factor. This bias was even more pronounced amongst female doctors.

Amongst female doctors the difference was more pronounced, as they reported age as an issue in 91 pct of the male patients they saw but only in 50 pct of the females. These differences may account for greater uncertainty about the diagnosis of CHD for women patients.

Overall, women doctors picked up more cues than male doctors (12.6 as opposed to 10.6 on average), indicating that women doctors perhaps listened more and were open to a wider set of potentially influential factors. They were also more likely to take note of the manner in which patients presented their case, such as how consistent and clear patients are in outlining their problems, and paid more attention to the subtext of what patients said.

This was particularly true if the patient was female (they noted 1.72 presentation mode cues on average for women, but only 0.94 for men). It could be that greater focus on the style of delivery of women patients may divert attention away from other diagnostic factors, such as patients' age.

Although the clinical effects of these differences in how women patients are treated requires further investigation, a patient is entitled to equivalent assessments irrespective of the GP gender, which this research shows is not the case.

"CHD is more common in men. According to the latest British Heart Foundation figures, around 1 in 4 older men over the age of 75 live with the condition. For younger women it is less common, but over the age of 75 the figure rises to 1 in 5 women living with CHD. We need to raise awareness about the importance of increasing age as a risk factor for CHD amongst women, to reduce delays in diagnosis," Dr Adams said.(With Inputs from ANI)