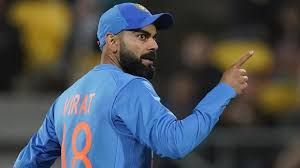 Cricket fans from India have started a petition online to stop Indian Cricket Team Captain Virat Kohli from Greeting the nation before major matches or series. This might sound funny but there are many people who believe that Kohli’s greetings actually jinx the chances of Indian team winning.

A user with name Abhinay Thakur has started a petition on popular petitions website Change.org, urging people to sign and to bring Kohli’s attention to the matter.

Indian team hasn’t been performing very well at some of the ICC international tournaments. And, Indian crickets fans have big hopes from Indian team at such events and when the team doesn’t perform well, it is disheartening for fans.

The petition by Thakur says, “Stop Virat Kohli and Sehwag from wishing Indian teams in ICC tournaments especially in Semis/Finals. These both jinxx our victories..! Suspend their social media accounts if they don’t stop posting congratulations post (sic),”

So far, the petition has received 750 signatures but as it has been picked up by some media outlets and cricket websites, it is expected to gather steam.

And, when people don’t have much to do online, why not sign a petition, if it can help Indian team win matches.