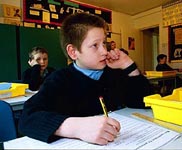 Washington, October 31 (ANI): Scientists have found that sound training via computer exercises can be helpful in curing the problem of sound processing among dyslexic children, which hinders their ability to read.

Dr. Nadine Gaab of the Laboratory of Cognitive Neuroscience at Children's Hospital Boston says that the new finding may eventually translate into measures to diagnose dyslexia even before reading begins. She counts musical training among the possible new ways of treating dyslexia.

The researcher used functional MRI imaging (fMRI) examine how the brains of 9 to 12 year-old children with developmental dyslexia and that of normal readers responded to fast changing and slow changing sounds, which the participants were made to listen through headphones.

She also involved educational software called ‘Fast ForWord Language’, designed in part by a co-author on the study named Tallal, in her study.

"This is obviously wrong. Children with developmental dyslexia may be living in a world with in-between sounds. It could be that whenever I tell a dyslexic child 'ga,' they hear a mix of 'ga,' 'ka,' 'ba,' and 'wa'," says Dr. Gaab.

However, dyslexic children’s brains changed after completing exercises in the computer program ‘Fast ForWord Language’, which involved listening to sounds, starting with simple, changing noises, like chirps that swooped up in pitch. The children then had to indicate whether the chirp’s pitch went up or down.

The researchers later introduced increasingly complex sounds like syllables, words, and sentences in the exercises.

The researchers, however, are unclear whether the improvement would have lasted beyond a few weeks, as they did not conduct follow-up tests.

Dr. Gaab is now planning to investigate whether other type of sound training—such as learning to sing or play a musical instrument—may help dyslexic children.

The study has been reported in the journal Restorative Neurology and Neuroscience. (ANI)