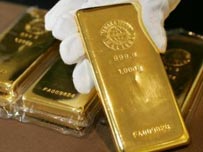 Gold rallied on Friday after China said it has added over 450 tonnes to its foreign reserves over the past six years. The reserves have risen to 1054 tonnes from 600 tonnes in 2003. This places China at the fifth spot amongst the gold-holding nations. Analysts expect China to buy more gold to match its holding with other central banks. This creates a very positive sentiment towards gold.

Today is Akshaya Tritya festival, an auspicious time for gold buying in India which continues to lend support.

The world's largest gold-backed exchangetraded fund, the SPDR Gold Trust, said its holdings remained at 1,104.45 tonnes as of April 27, unchanged from the previous day. Its holdings hit a record 1,127.68 tonnes on April 9, and remained at that level for a week.

Immediate delivery bullion surged as much as 0.6% to $918.55 /oz, the highest since April 2. Silver breached $13/oz barrier for the first time since April 3 rising as much as 3% to $13.26 before trading at $13.16. The dollar fell to its lowest in a month against the yen on Monday as concerns about the spread of swine flu from Mexico send investors into perceived safe-haven currencies such as the Yen and the Swiss franc.

Akhshya Tritya boosts domestic demand in India, top consumer of Gold. Sales have increased and especially good demand was witnessed in states such as Kerala, supporting Gold prices. U. S. stress result which is likely to get declared on 4th May, might attract investors to buy Gold. We recommend buying Gold at dips for the day.

Gold technically looks strong for the day we see good support pegged at Rs. 14427 and on the resistance front we see RS. 14728. Looking at RSI and ADX we believe gold can extend it gain and may touch $925/oz on Comex.