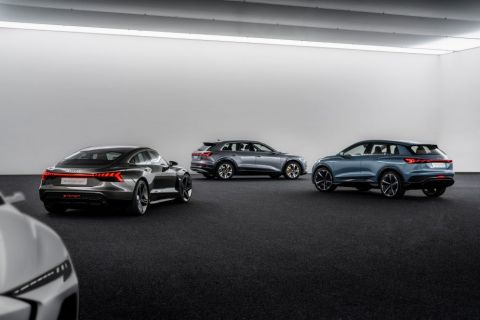 German automaker Audi is apparently planning to launch a new electric 4-dour coupé. In an evident indication of its plans, Audi has recently teased the coupé by publishing a series of images of the vehicle.

Going by the indications, the forthcoming electric 4-dour coupé will be based on the next-generation electric platform called Premium Platform Electric (PPE), which has been developed by Audi in collaboration with Porsche.

Audi and Porsche -- which are both Volkswagen brands -- have been working together on building the new PPE platform since 2017. The automakers expect to commence the production of the PPE at the beginning of the next decade. However, the exact timeline for the launch of the platform has not been specified by the automakers.

The recent release of the teaser images of the PPE-based electric 4-dour coupé by Audi implies that the coupé is one of the electric vehicles (EVs) which the automaker plans to launch on the market in the coming years. With the e-tron SUV having been launched by Audi earlier in 2019, the automaker is planning to a Sportsback variant of the vehicle in 2020. In addition, another forthcoming EV from Audi will be the PPE-based sports sedan called e-tron GT.

The upcoming EVs planned by Audi will now include the electric 4-dour coupé as well. The coupé will likely be unveiled in detail by the automaker by the end of 2019.