Audi: Production model of Q4 e-tron will be manufactured at Zwickau factory 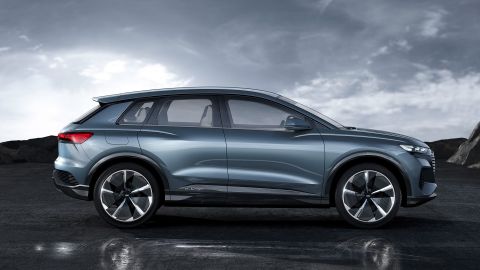 According to a recent confirmation by German automaker Audi, the production model of its upcoming Q4 e-tron concept will be manufactured at the Volkswagen factory located in Zwickau.

The Q4 e-tron concept, which was earlier presented as a study in Geneva, will be Audi’s first electric car based on the MEB platform. Audi has already announced that the series production for the vehicle is scheduled to start by end-2020. Now, the automaker has disclosed that the production of the vehicle will be undertaken at the Zwickau factory.

Audi’s official decision related to the production of Q4 e-tron concept in Zwickau implies that the vehicle will be produced at the same factory where the Volkswagen ID.3 and the Seat el-Born models are currently being produced.

About the production of electric vehicles (EVs) of different brands at the Zwickau factory, a statement released by the Audi headquarters has elaborated that the bundling of the platforms in production “enables the future large-volume electric models to be produced in large quantities and with great efficiency.”

Meanwhile, with regard to Audi’s future plans to launch more electric models -- besides the Q4 e-tron -- based on the MEB platform, an Autoblog report has revealed that the automaker is planning two more MEB-based EVs in the coming years. One of these vehicles will be a sportier variant of the Q4, while the other will be a sedan.