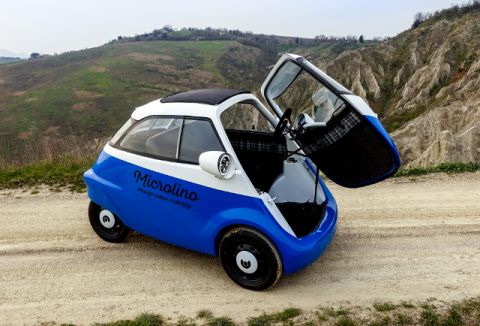 The Microlino 2.0, an all-electric space saving, lightweight bubble car designed for urban mobility purposes, has entered its final phase of development and it is now production-ready. The manufacturer has just shown off the production-ready third prototype of the mini electric car with a number of eye-catching features, including folding roof and slick-looking interior.

Among the major updates brought by the latest prototype, the chief is the new, straightforward interior design that appears to be simple yet elegant. The interior matches the calm exterior design of the EV.

Inside the mini EV, there are two digital displays. One of the two displays is located behind the vehicle’s steering wheel to provide information related to the speedometer and other readouts. The second display, which is smaller in size than the first display, serves as an interior control screen for features like climate control.

The Microlino 2.0 also boasts to have re-engineered folding roof that can easily be opened with one hand while driving to allow fresh air to flow into the EV. The folding roof will be optional on the base model but it will come standard on premium models. The manufacturer has also done away with door handles. Instead, the EV has been equipped with a key and a small button under the headlight to allow the driver to lock and unlock the EV.

It is also worth mentioning here that the manufacturer of the electric bubble car opted for a center touchscreen instead of physical buttons simply because it will allow the company to push updates with new, additional features, something that will not be easy to do with physical buttons.

Microlino has announced plans to set up a manufacturing facility in the European country of Italy, called Microlino Italia, to handle the production of mini electric bubble car. The facility will be located at the premises of its manufacturer partner CECOMP in La Loggia, Turin.

Providing explanation, the company said, “Together with our partner CECOMP we have established a new company, Microlino Italia which will be responsible for production. At the beginning of the Microlino project we never wanted to be manufacturer ourselves but we realized that this is the only way to control the quality and at the same time reduce the cost of production.”

Due to Microlino’s ‘reduce to the max’ approach, the electric bubble car will have roughly 50% less components than a regular car. Reducing the number of parts will not only reduce weight and trim down maintenance costs but also make it more energy efficient, increasing range on single charge.