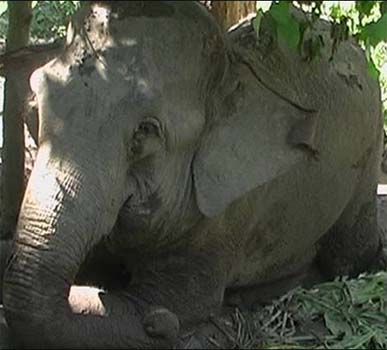 Bhubaneswar, Nov 15 - An 80-year-old female elephant, one of the oldest pachyderms in Orissa, died of injuries inside a reserve after battling for life for three days, an official said Sunday.

The elephant died Saturday in the Chandaka wildlife sanctuary on the outskirts of state capital Bhubaneswar.

The official said the elephant was bleeding profusely and was in excruciating pain due to multiple injuries on her body. The cause of the injuries was not known.

"She died Saturday of multi organ failure and injuries. She had pneumonia and haemorrhage in the intestine. Veterinary officials could not provide treatment because she was old and the tranquilizer could not be used," Divisional Forest Officer A. K. Patnaik told IANS.

"We found injuries on her body and are trying to find out how she got them," he said.

According to the 2007 census, Orissa has about 1,860 elephants. Chandaka wildlife sanctuary, which is also an elephant reserve, houses 67 of them. (IANS)