At 32, Oz pacer Lee aims to be faster than ever 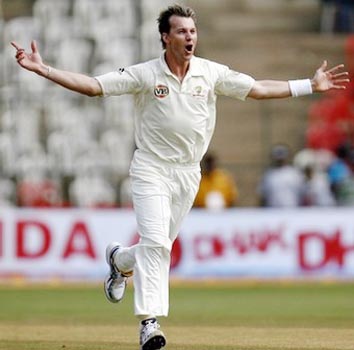 Sydney, Mar. 15 : Australia's Brett Lee has revealed that he intends to return to international cricket by bowling faster than ever.

Once regarded as the "Golden Boy" of Australian cricket, Lee, 32, is under pressure to reclaim his place in the Test and one-day teams for the Ashes Tour.

He will try to win his place on a diet of four-over spells in the Indian Premier League that gets underway next month.

"People might think 32 is old for a bowler, but the way that I look at it, you look at the great sprinters around the world,'''' the Daily Telegraph quoted Lee, as saying.

"You''re using the same type of muscles, it''s the same type of build-up, it''s all about fast-twitch fibres ... most of those guys don''t reach their peak until they''re 34 or 35. I still firmly believe that I can be in the same boat as them. I actually want to get quicker and be better than what I have been,'''' he added.

The emergence of the new breed of Australian pacers on the tour of South Africa has put Lee''s position under threat.

Looking back, the past eight months must be almost unfathomable for the blond speedster.

First there was his public blow-up with captain Ricky Ponting in India, when the skipper refused to bowl him.

Then followed a lean summer on home soil against New Zealand and South Africa, when he was hampered by stress factures in his foot.

As if that wasn''t bad enough, privately his world was caving in as the breakdown of his marriage put him under enormous stress.

"It''s obviously been a very tough time in my life. It''s been a difficult 12 months in all aspects - cricket and personal,'''' Lee said.

"I''ve been up against a bit of a brick wall. But I''m through that brick wall now and I can see light out the other side," he added.

"I firmly believe things happen for a reason in all aspects of life,'''' he said.

Last Friday, Lee allowed The Sunday Telegraph to watch him train at the SCG nets.

The rewards of his six-day regime under personal trainer Paul Haslam were obvious.

From the glint in his eye and the purpose in his training, it is obvious Lee is serious about his comeback. (ANI)