Women Avoiding Cancer Pills Due To Side Effects 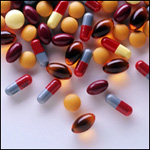 Washington: According to new study report, scared of side effects, women have stopped taking pills that can help keep breast cancer from coming back, but such women who stop taking pills risk early death.

A study found that women in Scotland were not taking the breast cancer pill tamoxifen as directed, and breast cancer’s new type of pill was causing cryptic aches and pains in women.

‘The chances of death for women who did not take tamoxifen were 16 percent higher,’ said, medical researcher, in a breast cancer experts’ meeting in San Francisco.

Tamoxifen transformed breast cancer therapy when it showed that the risk of cancer return reduces by close to 50 percent. The pill under brand name Nolvadex sold by AstraZeneca and available generically, increases the death’s risk from strokes and endrometrial cancer.

Drugs’ newer class, the aromatase inhibitors, seems to be safer, but cannot be taken by women who are not yet through menopause.

Dr. Alastair Thompson from the University of Dundee, Scotland and colleagues checked the records of 2,080 women treated for breast cancer between 1993 and 2002.

However, tamoxifen showed working best when taken for five years. The women in the study took the drug for an average of just under 2 1/2 years.

Thompson told “It could well be a question of side effects, I think most women who take tamoxifen know that it does have very substantial and life-affecting side effects, even if just hot flashes, which can make life a misery.”

In the another study, Dr. Lynn Henry of the University of Michigan Comprehensive Cancer Center observed that 13 percent of women taking an aromatase inhibitor asked to stop the drug because of muscle aches.

In total, 23 percent of 100 women enrolled in a trial comparing two different aromatase inhibitors gave up because of side effects.