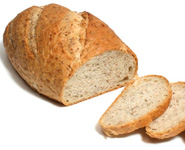 Washington, Sept 6 : Eating whole-grain barley or rye bread at breakfast really is good for you, for it helps keep blood sugar in check the whole day.

Breads made from whole-grain barley or rye are good for the system as they contain a combination of low GI (glycemic index) and certain type of indigestible carbohydrates that occur in certain grain products.

Glycemic Index (GI) is a measure of how rapidly the level of blood sugar rises after ingestion of food containing carbohydrates. The rapidity of the increase depends on how long it takes for the body to break down the carbohydrates in the intestines to glucose and then absorb the glucose into the blood. When you eat products with a low GI, the blood sugar level rises slowly and the insulin increase is lower. Foods with low GI offer several health advantages.

The study was carried out by Anne Nilsson, a doctoral student at the Unit for Applied Nutrition and Food Chemistry, who said that this was the first time that it had been found that the benefits of a carbohydrate-rich breakfast with low GI lasts till after dinner.

"It is known that a carbohydrate-rich breakfast with low GI can moderate increases in blood sugar after lunch. But my results show that low GI in combination with the right amount of so-called indigestible carbohydrates, that is, dietary fiber and resistant starch, can keep the blood-sugar level low for up to ten hours, which means until after dinner," she said.

Nilsson carried out the study on four types of grains, in which barley evinced clearly the best results.

In her test, she used boiled grains and whole grains in bread. But when the grain was ground into porridge, the effect was weakened, since key structures were then destroyed, which had a negative effect on both GI and the content of resistant starch. On the other hand, splitting the grain worked fine.

The studies also revealed that the right grain can have a favorable impact on the metabolic syndrome, which is a catch-all name for a condition involving severe risk of diabetes and cardiovascular diseases. The diagnosis includes heightened levels of blood sugar and insulin, raised blood fats, high blood pressure, and abdominal fat.

Nilsson also studied the connection between mental acuity and blood sugar levels after meals. Trial subjects were given experimental breakfasts with low and high GI, respectively, and afterwards they were asked to perform mental acuity tests. It turned out that subjects who had eaten low GI breakfasts could concentrate better and had a better working memory (a type of short-term memory) than the other group.

These experiments also showed that healthy individuals with low glucose tolerance, that is with high rises in blood sugar than average following a meal, generally performed less well.

"The findings indicate that people with great fluctuations in their levels of blood sugar run a greater risk of having a generally lower cognitive ability," said Nilsson. (with Inputs from ANI)