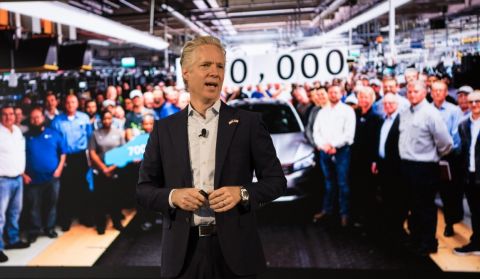 Top executives of Volkswagen AG (VW) and some other automobile manufacturers met with the head of the Environmental Protection Agency (EPA) and reaffirmed their support for a carbon emissions deal that their companies struck in July 2019. In July 2019, VW, Ford, Honda and BMW signed a voluntary agreement with the state of California on trimming down vehicle emissions through the model year of 2026 which would let them meet a single countrywide standard.

Wolfsburg, Germany-headquartered VW embraced electric vehicles (EVs) after it came under fire for cheating authorities on diesel emissions. Now, VW aims to increase the share of EVs in its U.S. sales to at least 50 per cent by 2030. Pushing ahead with its transition from internal combustion engines (ICEs) to EVs, VW has planned to invest more than $30 billion in EVs by 2023. The sum is roughly equal to the auto giant’s combined profits from 2015 through 2018. Most recently, VW invested additional $620 million in Swedish battery manufacturer Northvolt to secure adequate battery cell capacity for its EV push.

Speaking on the topic, Regan said, “It is clear more automakers now feel the same way and that's a good thing. We welcome them to the table. Electric mobility for all will only take hold in this country when everyone is all in - industry, state and federal government, consumers.”

Regan also spoke with the top executives of GM, Ford, Honda, Stellantis and Toyota as the federal agency is mulling plans to announce a proposal to revise carbon mission rules implemented by former President Donald Trump.

GM chief executive Mary Teresa Barra threw her company’s support behind the overall CO2 reduction targets set in 2019 through the automakers’ deal with the state of California. But, she stressed that the Biden administration should provide automobile manufacturers with more flexibility to hit the CO2 reduction targets between now and 2026.

In 2020, the Trump administration rolled back of vehicle emissions standards to require 1.5 per cent annual increase in efficiency through the year of 2026, well below the 5 per cent annual increase set by the Obama administration. As per the Center for Biological Diversity’s (CBD’s) estimates, the California vehicle emissions deal has the potential to improve fuel economy by 3.7 per cent year over year between 2022 and 2026.