US can no longer ignore a popular Sharif: Experts 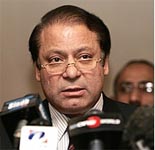 Lahore, Mar. 25 : Former Pakistan Prime Minister and chief of the opposition Pakistan Muslim League-Nawaz (PML-N), Nawaz Sharif, has emerged as the most popular politician in Pakistan after defying his house detention and leading a triumphant protest that forced the government to restore the country's deposed chief justice.

According to the New York Times, the Obama administration, which is in the process of fine tuning its strategy toward Pakistan and Afghanistan, has to decide whether Sharif, 59, a populist politician close to Islamic parties, can be a reliable partner?

Sharif's political past, according to the paper, has inspired distrust both here and in Washington.

However, now his supporters and other analysts describe Sharif as being a more mature politician, wiser after eight years of exile in Saudi Arabia and London, and that he is eager to prove he can work with Washington and to put his imprint on a workable approach toward stabilizing Pakistan.

In any case, opponents and supporters believe that Sharif has made himself a political leader Washington can no longer ignore. He is now the front and centre in Pakistani politics.

"If Washington is going to carry Pakistan, it is important they do it with popular support. There's the realization in Washington that he is the next guy we should talk to," the paper quoted Senator Enver Baig, a disaffected member of the governing Pakistan Peoples Party, who resigned from a party post last month, as saying.

"Nawaz Sharif is a reflection of Pakistani society. He is silent on what matters most: the insurgency. What we need is a leader," adds Pervez Hoodbhoy, a physicist and a critic of current government policies.

"We, and all sensible Pakistanis, need the support of Saudi Arabia and the more moderate Islamist parties, particularly Jamaat-e-Islami, if we are ever going to tame the jihadis. Nawaz's good standing with them is very, very important," ," said a former American ambassador to Pakistan, Robert B. Oakley.

Maleeha Lodhi, a former Pakistani ambassador to the United States, said Washington's suspicions of Sharif might actually be helpful.

"He is sufficiently distanced from the United States to be a credible partner in the eyes of Pakistanis," she said.

Some experts are sceptical that Sharif can distinguish between the militants and the conservative Islamic parties.

"There's no evidence that he understands the difference between these groups," said Stephen P. Cohen, a scholar at the Brookings Institution in Washington. (ANI)