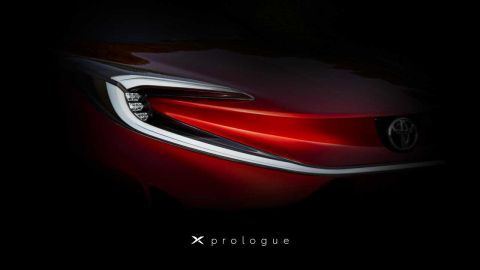 Japanese automotive manufacturer Toyota Motor Corporation has just announced the release of the first teaser picture of its upcoming new battery electric vehicle called “X Prologue,” which is expected to be unveiled as soon as next week.

Toyota has been known for its lack of interest in battery electric vehicles, but it is perhaps aware of the fact that there is a dire need to add some EVs to its lineup to remain competitive in the fast-growing global automobile market. It is for this very reason that the Japanese automaker has announced new electric models.

Yesterday, the auto giant released a teaser picture of an upcoming vehicle dubbed “X Prologue, and urged people to join it online at www.x-prologue.com on next Wednesday (March 17, 2021) at 10:00 CET to witness the full reveal.

While the auto giant gave no indication that the X Prologue is going to be an EV, many experts are dead sure that the newly released teaser image showed the vehicle’s closed front-fascia, which confirms that the upcoming vehicle will be an EV.

Interestingly, the Japanese automaker released the teaser image on its European official website and not its global or North American websites, which indicates that the X Prologue could be a Europe-only model, not developed for the American or Asian markets.

Toyota has never been a big fan of EVs. In the recent past, the company has always dismissed battery electric vehicles, and focused on hybrids and fuel cell vehicles. At an annual event last year, the company’s chief executive Akio Toyoda criticized the global shift towards battery electric vehicles, and argued that it was not a good idea to make a shift for massive electrification.

Despite all that, the Japanese auto giant feels the need to add some EVs in its lineup so that it could remain competitive in the fast-growing global auto market.

Toyota is not the only automaker that is trying to accelerate its shift from ICEs to EVs as almost all other conventional auto makers are doing the same, particularly in Europe, where regulators are forcing them to have a higher mix of EV in their sales in order to comply with emission standards. European countries like the United Kingdom (UK) have already declared their plans to gradually phase out gasoline-guzzling vehicles in favor of EVs to help protect the environment and public health.