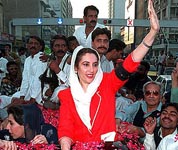 Karachi, Oct 18 : A large number of supporters of former Pakistan Prime Minister Benazir Bhutto have gathered at the Karachi International Airport to accord a warm welcome to her today.

Pakistan People’s Party (PPP) chairperson Bhutto is returning home after eight years of self-imposed exile. Her flight from Dubai is expected to land here at 1.00 p.m. Bhutto left the country soon after Gen Musharraf seized power in a coup.

Thousands of local leaders and workers of the Pakistan People’s Party Parliamentarians travelled in thousands of cars, jeeps, wagons, buses and coaches for Karachi from different parts of Sindh to receive Bhutto.

People are coming from here from several parts of Pakistan, but especially from all corners of Sindh province, a PPP stronghold.

Rafique Jamali, President PPP Dadu, claimed that there would be two seas in the Karachi city: First one the Arabian Ocean and second one the sea of humanity.

Soon after her arrival at the airport, party workers will accompany Bhutto from the airport to the mausoleum of Pakistan founder Mohammed Ali Jinnah in a massive procession.

Bhutto will be greeted with banners, posters and hoardings in the PPP’s green, red and black colours throughout out the way.

About 20,000 troops and police have been deployed in Karachi amid threats by Islamist militants to assassinate Bhutto.

"I'm sure the (provincial) government will take all possible measures to provide foolproof security arrangements, which I’m told, are already in place," he said.

Some 2,500 paramilitary troops have been deployed around Karachi Airport alone, according to one security spokesman.

On Wednesday, Bhutto told journalists in Dubai that she was hoping that hundreds of thousands of supporters would turn out in Karachi.

Celebratory gunfire has already been heard overnight. On Thursday, schools and many roads will be closed in Pakistan's biggest city.

Addressing a press conference in Dubai on Wednesday, Bhutto said: "Nobody can keep me away from Pakistan."

"I will keep my promise of returning to Pakistan. It is true the Pakistan government has been trying to keep me away from home but I have decided to return nevertheless," she added.

There have been only two massive receptions in the history of this country. One was on April 10, 1986, for Benazir in Lahore, and the second was her reception on May 3, 1986, in Karachi. We are hoping to match those receptions," said Safdar Abbasi, a Senator of the PPP. (ANI)