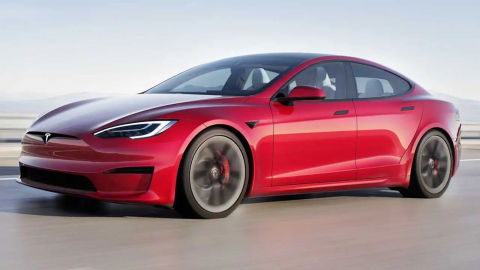 According to Leno, who is one of the few car reviewers with whom Tesla is still working directly, told reporters that he saw the Tesla Model S Plaid covering a distance of quarter-mile in just 9.247 seconds at a speed of 152 miles per hour (mph). A National Hot Rod Association (NHRA) official was present at the racetrack to make the Model S Plaid’s achievement official.

The record-setting performance by the Tesla Model S Plaid was given at the Famoso Raceway in Bakersfield—a city in Kern County of the U.S. state of California.

Announcing the Plaid’s impressive run on the racetrack, Leno said, “I’ll tell you what I did. I went up to Famoso Dragway in Bakersfield. And the Tesla Plaid I drove by, and the NHRA guy was there to make it official. It turned a 9.247, at 152 MPH.”

Tesla had announced some really impressive specs for its upcoming Model S Plaid, and the EV giant had been bringing prototypes to different racetracks in California to test those specs. Most of the industry experts had been expecting the Plaid to break some records, and it really did.

However, all those eye-catching specs and features will come at a considerable cost. The Model S Plaid will cost $119,990; while the Plaid Plus model will make the buyer fork out $139,990.