'Silent' seizures behind 'spells' of increased confusion in Alzheimer's patients 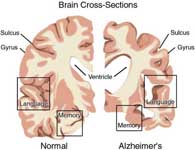 Washington, Sept 6: A new study has found that mice genetically engineered to have Alzheimer's disease suffer silent seizures which may occur due to cellular changes.

The cellular changes are a result of excess accumulations of the protein amyloid beta.

"These seizures are not the typical epileptic seizures or convulsions that most people would recognize," said Dr. Jeffrey Noebels professor of neurology, neuroscience and molecular and human genetics at Gladstone Institute of Neurological Disease and Baylor College of Medicine and a co-senior author of the report.

"These episodes may be the reason that some people with advanced Alzheimer's disease have 'spells' of increased confusion. Further study of this mouse may offer new ways to prevent these episodes," Dr Noebels said.

Noebels recorded electrical brain waves deep in the brain of these special mice in the Bluebird Circle Developmental Neurogenetics Laboratory at BCM. The activity was detected in the brain's hippocampus, an area important in memory.

"This discovery has helped identify a new and potentially reversible neural mechanism that can explain the episodes of sudden severe confusion found in cases of advanced Alzheimer's disease," said Dr Noebels.

"The cellular changes that give rise to this hyper-excitability appear slowly as the disease progresses, and at a certain point, the brain networks actually become hyperexcitable, despite the loss of synapses and brain cells in this brain region. Further study may point to early treatment that might prevent these electrical brain spells, as well as slow down the progression of this debilitating disease," Dr Noebels added.

"Such abnormal network activity in Alzheimer's patients was thought to be a collateral or secondary event caused by the degeneration of nerve cells," said Dr. Jorge Palop, the study's lead author and a Gladstone research scientist.

"But our study suggests that this activity may actually be a primary effect of amyloid beta and an early determinant of cognitive failure," Dr Palop said.

Amyloid beta is a toxic protein fragment found in the brains of people with Alzheimer's and similar disorders.

"Our results have important therapeutic implications, because the prevention and reversal of non-convulsive seizure activity has not yet been a major focus of clinical trials in Alzheimer's disease. Our results suggest that the suppression of this activity might prevent and possibly even reverse cognitive impairments induced by high levels of amyloid beta," said Dr. Leonard Muecke, co-senior author, professor of neurology at the University of California San Francisco and director of the Gladstone Institute.

The study appears in the Sept 6th issue of the journal Neuron. (With Inputs from ANI)