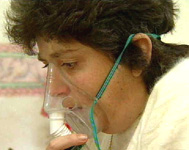 Researchers in the School of Medicine enquired about fungal deposits in homes of the patients. Later a trained observer inspected the homes to locate the deposits.

In fifty percent of the houses with mould (chosen at random), the mould was removed with a fungicidal wash and ventilation was improved by fitting a fan in the loft.

In the remaining houses, mould removal was delayed for twelve months.

"In the houses where mould was removed, the symptoms of asthma improved and the use of inhalers decreased more than in the other houses. Removing mould also led to improvements in other symptoms: sneezing, runny or blocked noses, and itchy-watery eyes," Dr Michael Burr, School of Medicine's Department of Primary Care and Public Health said.

"There was no clear effect on measurements of breathing, but this may have been because patients used their inhalers as needed so that they could always breathe freely," Dr Burr added.

Experts also feel that the study has added to the material to the existing record that moulds may have a link with Asthma.

"The publication of this study adds to the increasing bank of research that indoor mould may have a link with asthma, however more work is needed in this area before definitive conclusions can be drawn,' Jenny Versnel, Asthma UK's Executive Director of Research and Policy said.

"Research into this area does, however, highlight the importance of keeping your house dry and well ventilated. This can reduce exposure to certain asthma triggers such as mould spores which are found in damp places," Versnel added.

The study is published in the September edition of the medical journal Thorax. (With Inputs from ANI)