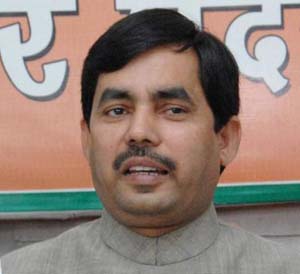 New Delhi: Congress on Monday went into damage control mode over party general secretary Digvijay Singh's purported comment that Rahul Gandhi does not have the temperament of a ruler even as BJP attacked the Congress Vice President saying he was "not Prime Minister material".

Hussain said that although Jawaharlal Nehru, Indira Gandhi and Rajiv Gandhi had ruled the country, "now there is a new thinking in this (Nehru-Gandhi) family that they should discharge the role of a ruler without taking responsibility".

He claimed that although Congress chief Sonia Gandhi had gone to the President in 2004 to stake claim to form the government, "later on she, however, delegated the responsibility to Manmohan Singh. Be a ruler without taking responsibility and the same role has now come to the mind of Rahul Gandhi".

Keeping up his attack, Hussain further said, "They (Gandhis) were in power for last 10 years but had no responsibility. A Raja went to jail (in 2G case) but the needle was pointed towards then Prime Minister Manmohan Singh. Digvijay Singh was indicating this new thinking that has emerged now (in Congress)."

An apparently embarrassed Congress, meanwhile, sought to explain Digvijay Singh's remarks as being due to the "churning" within the party following its Lok Sabha poll debacle. On the other hand, one senior leader totally rejected Digvijay Singh's contention that Rahul Gandhi does not have the temperament of a ruler.

"Digvijay Singh has already clarified his statement. The fact is that Congress has not performed very well in the election. There are different voices which are emanating from different parts of the country. Senior leaders are speaking. There is a process of churning which is going on.

"I think all this will be factored into the churning and wherever correctives have to be applied either collectively or individually, those correctives will be applied. So I do not think that there is really reason to read very much into a particular statement or statements, whichever have emanated from the leaders," said former Information and Broadcasting Minister Manish Tewari.

Tewari said that in a democracy, everybody has a point of view "but that does not necessarily mean that that point of view is finger-pointing at somebody or the other".

Another party leader Anil Shastri, a Special Invitee to the Congress Working Committee, said tweeted that, "No party can ever win an election if its leader doesn't want to rule. RG is intelligent & fully understands this. Congress will rule again."

He added in another tweet, "I firmly believe RG's entire campaign was directed towards winning elections. Why then will he not want to rule being in electoral politics?"

The controversy erupted on Saturday following the airing of a television interview of Digvijay Singh by a channel in Goa during which he said that Rahul Gandhi did not have the temperament of a ruler, adding that he felt he should have taken up the post of Leader of the Party in Lok Sabha.

Asked about his comments, he told PTI that what he meant was that "He (Rahul) is someone who doesn't run after power. He is not power hungry but wants to fight injustice."

Clarifying in Bangalore, he had said, "I said he is always fighting against injustice and therefore he is not for power. He fights injustice. That is the difference between us and him.

"He is aggressive when it comes to fighting injustice."--- PTI