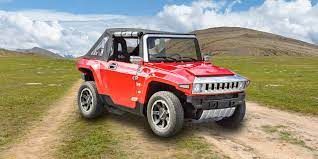 Obviously, this Chinese imitation of the real GM electric Hummer does not just carry over all of the aggressive lines of the real electric Hummer manufactured by American automobile giant GM. In fact, the Chinese small Hummer appears to be little goofy, thanks to its smaller size and somewhat strange looks.

However, it features a pretty decent interior, and comes equipped with a 72V system and a 7.5 kW (10 hp) motor that is capable of hauling the Hummer-shaped EV at a speed of up to 60 km/h (roughly 38 mph).

Those who crave for the GM electric Hummer but don’t want to spend $80,000 can consider this tiny imitated EV from Alibaba. Priced at $11,000, this EV is a lot more affordable and can accommodate two people. Interested potential buyers can also opt to have their hands on customized models, with options including accessories like a CD player, heated seats, and even air conditioning. A lithium-ion battery upgrade costs additional $4,757.

Similarly, China manufactured its own version of the Hummer, and it was named the Dongfeng EQ2050 M3D. At least three Chinese manufacturers are producing duplicates of the original Hummer. The Dongfeng is based on an imported model called the Hummer H1.

Geely GE, Chinese multinational automotive company headquartered in Hangzhou, closely resembles a Rolls Royce Phantom, which can be afforded by only a handful of the world’s richest people. This Chinese copy of the Rolls Royce costs just $44,000. Geely GE is an acronym used for ‘Greely Excellence’ and it was launched in 2010.