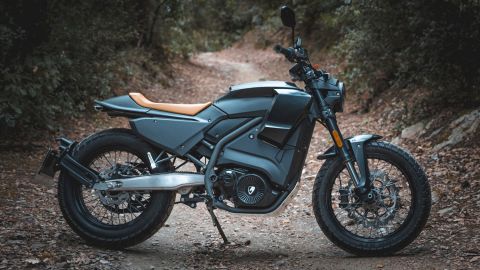 Spanish motorcycle manufacturer Pursang has confirmed that its retro-inspired motorcycle called the E-Track is finally ready for mass production, and the first batch of the all-electric bike has already made its way to the E-Center Showroom in Helmond, The Netherlands.

Unveiled last year, the Pursang E-Tracks is an elegantly-designed, retro-inspired flat-tracker/scrambler. Images published by the Spanish manufacturer show that the e-bike departs from the sharp and angular body style that has become typical among futuristic fully-electric two-wheelers. Instead of the sharp and angular body style, Pursang opted for a more minimalist, retro-inspired styling for the upcoming e-bike.

The Pursang E-Track comes equipped with a powerful 11kW Bosch electric motor that draws energy form a pack of three 48V lithium-ion batteries. Overall, it offers energy equivalent of a 15 horsepower. The manufacturer has limited the e-bike’s top speed to 75 miles per hour (mph), and has equipped it with three riding modes, known as Go, Cruise, and Boost. Paprt from those riding modes, the electric two-wheeler gets a nifty crawl mode that allows the rider to push the e-bike with minimal electric assist.

When it comes to range and battery power, the Pursang E-Track promises to cover distances of up to 120 kilometer (roughly 75 miles) on a single charge. The battery pack consisted of all three 48V batteries takes roughly six hours to get fully recharged. Its TFT display clearly shows speed, range, engine power regeneration, riding mode, as well as battery life. In addition, it comes with smartphone connectivity features, and the user can connect via the Bosch mobile app.

This first e-bike from Pursang apparently bets on top-of-the-line components, which is evident from its Bosch engine, the high-end brakes signed by the Spanish company J.Juan, damping from the specialist Ollé and the Pirelli Scorpion tires.

The spanking new Pursang E-Track is available at the E-Center showroom in Helmond, The Netherlands, with prices starting at €14,499 (approximately US$17,652). The E-Center is a collaborative venture between an electric two-wheeler distributor called Electric Motorbikes and an EV website known as The PACK.