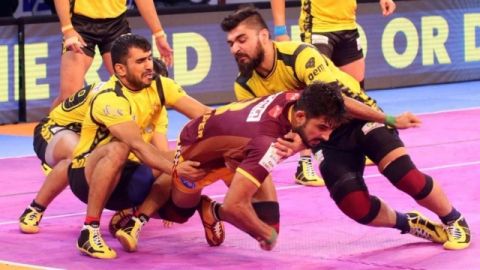 Even though there are a plethora of theories surrounding the origin of kabaddi, it emerged as a competitive sport only in the 1920s. In the 20th century, the sport featured in the Asian Games and also in the Indian Olympics. However, it was devoid of the funfair.

The thing that put kabaddi to compete with cricket, the most competitive and popular sport in India didn’t arise until the World Cup of 2006. It was Charu Sharma, the director of Mashal Sports, who realized its perspective. In 2014, Mashal Sports along with Star Sports, the broadcaster organized a franchise-based sports league, the Pro Kabaddi League.

This model changed kabaddi into a commercially-viable, enthralling game that is watched by millions of people in the country. Even though it is a little tricky to compete with the biggest cricket league in the world, the Indian Premier League, the success of the Pro Kabaddi League is remarkable.

With India’s franchise football league, the Indian Super League, also flourishing, there is healthy competition between all of the leading sports in India.

There are some statistics that prove the dominance of IPL over the other two leagues. In the cricket league, there are the best crickets. Thus, it has a global appeal. But PKL doesn’t have this. Also, IPL had a 6-year head start on the other two leagues. Hence, it is not surprising that IPL has a lead when it comes to Twitter followers.

Even though it is decontextualized from the IPL, there are more than 300k followers of PKL on Twitter. This is pretty impressive. Unlike football or cricket, kabaddi is a sport that is hardly followed outside India. The sport never had a league as big as this one with which it could develop a following.

There are many things that prove that PKL is much closer to IPL when it comes to its popularity in Indian than displayed by social media. Check out the below graph that was taken from a research piece from Betway Sports. 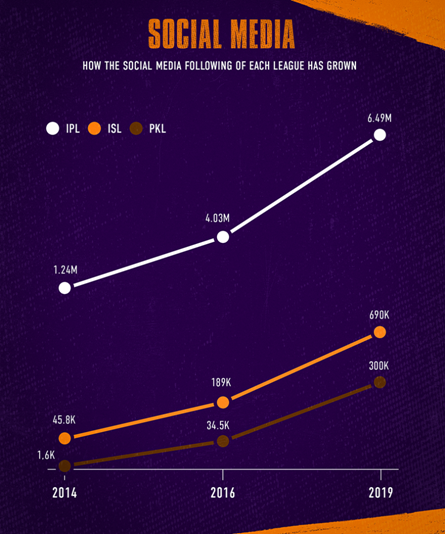 There was a surprise when it had been announced towards the end of the first season of PKL in 2014 that it had amassed a total of 435 million views and the final was watched alone by 86.4 million people.

The Indian Premier League was viewed by more than 560 million people months earlier, hardly an exceptional victory with the ISL viewed only by 429 million in its inaugural season in the same year. But the numbers have proved to be a flash in the pan.

Star Sports, the broadcaster had proved themselves to be excellent television marketers that played a significant role in the growth of the Indian Premier League. It pulled different types of shorts, laser shows, sharp explainer views, and also encouraged the player to sharpen up their image with a tattoo or a haircut.

It seemed like the seeds that had been sown prior to the first season have borne fruit since. The TV viewership has increased. Kabaddi used to be a sport that people didn’t watch or take interest in. However, it is now easily beating football and is a tough competitor of cricket.

The PKL Season 4, the event’s second edition to be played in 2016, saw a 51% increase in viewership in comparison to Season 1. Even when PKL's popularity was under threat, the foundation that had been led by Star Sports in 2014 has been carried through.

In the year 2018, PKL Season 6 had been pushed back from its July-October slot to October-January for facilitating the Kabaddi Masters and Asian Games. The fatigue of the audience in comparison with the clashing of the league with the IPL created a dip in the viewership for the first time. However, the dip did not last very long.

In 2019, the league regained momentum. Thus, blew ISL out of the water with 1.2 billion impressions to make sure that its long-term trajectory remains on the positive side. Even though the 2020 edition had been postponed, there has to be some confidence that PKL is now ingrained that the viewers are going to remain engaged in the game.

The league's sponsorship and viewership keep pace with the IPL. Thus, it can be expected further growth is expected to come.