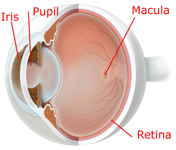 Washington, September 11 : The risk of eye disease macular degeneration may be reduced by consuming higher levels of the yellow plant pigments lutein and zeaxanthin, suggests a study.

Age-related macular degeneration (AMD) predominantly afflicts elderly adults, according to a report in the Archives of Ophthalmology, one of the JAMA/Archives journals. The condition occurs when the macula, the area at the back of the retina that produces the sharpest vision, deteriorates over time, the report adds.

It further states that AMD is a leading cause of irreversible blindness among elderly people of European descent.

The Age-Related Eye Disease Study Research Group assessed 4,519 individuals who were 60 to 80 years old when they enrolled in 1992 through 1998. The researchers had taken photographs of the participant's retinas to determine if they had AMD at that time. In the case of people with AMD, the snaps were also to be used to see to which of four stages the condition had progressed.

The participants completed a food frequency questionnaire that measured how often they consumed foods rich in certain vitamins, minerals and other nutrients that included lutein, zeaxanthin, beta-carotene, lycopene and vitamins C and E.

Based on the amount of each nutrient the participants consumed, they were divided into five groups, say the authors.

It was found that the subjects who had the highest levels of lutein and zeaxanthin were significantly less likely than those in the group with the lowest levels to have advanced AMD. hey were also less likely to have large or numerous intermediate drusen, yellow or white deposits on the retina or optic nerve head that are a sign of AMD.

The consumption of no other nutrient showed any such association, say the authors.

They write in their report that Lutein and zeaxanthin, also called carotenoids and found in yellow and dark leafy vegetables, may affect processes through which light and oxygen damage the eyes.

"Lutein and zeaxanthin have the capacity to filter short-wavelength light associated both with photochemical damage and the generation of reactive oxygen species that attack cellular lipids, proteins and nuclear material; these carotenoids also have the capacity to reduce the potency of nascent reactive oxygen species," which damage cells, write the authors.

"If these cross-sectional results can be confirmed in prospective samples and experimental studies, lutein and zeaxanthin may be considered as useful agents in food or supplement-based interventions designed to reduce the risk of AMD," they conclude.(With Inputs from ANI)