London, February 18 : Schoolboy Alfie Patten, 13, who is believed to have fathered a baby with his girlfriend Chantelle Steadman, 15, at this tender age, may make millions by revealing the results of his DNA test live on TV.

If reports are to be believed, Alfie's father, Dennis, wants him to declare the test result live on a TV talk show.

According to the Daily Star, the 45-year-old has been hawking his son's story to the highest bidder.

He is even said to have openly bragged about trying to make as much cash as possible.

Alfie agreed to the DNA test after two other teen boys - Richard Good sell, 16, and Tyler Barker, 14 - claimed that they could be the real father of the baby girl, Maisie.

London, February 17: The mother of schoolgirl Chantelle Steadman, 15, who is believed to have given birth to the daughter of Alfie Patten, 13, insists that a DNA test to prove the paternity of her one-week-old granddaughter, Maisie, will take place for the sake of the children.

Penny, 38, insists that the DNA test's results could prevent her and Chantell hiding away from people to escape the cruel gossip, in the wake of claims of paternity laid by two other teen boys and six others.

London, Feb 14 : Police are not looking to prosecute the 13-year-old Brit boy who recently became a father.

A Sussex Police spokeswoman said that the force looked at the case and decided that it was "not in anyone''s interests" for a prosecution to take place. 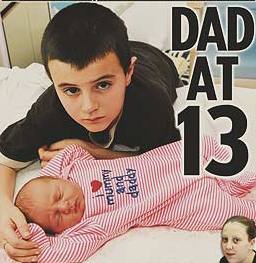 London, Feb 13 : A 13-year-old British boy, who looks more like an eight-year-old, has become a father of a baby girl.

Maisie was conceived after Chantelle and Patten - just 12 at the time - had a single night of unprotected sex.

Patten revealed how he decided against an abortion after discovering she was pregnant.

"I thought it would be good to have a baby," the Sun quoted him as saying.