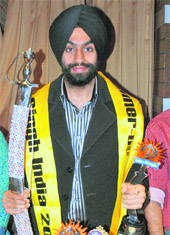 Ludhiana, April 29: Ludhiana-based Paramdeep Singh, the first runner up at `Mr. Singh India 2009’, is keen to promote Sikhism while building a career in the glamour world.

Paramdeep walks down the ramp as a proud Sikh’. Despite making a professional career through fashion, Paramdeep wants youngsters to not put aside their religious identities in the name of fashion.

“I am 23-year-old and I found the youth of my age cutting their hair. Also, they hate to wear a turban. They believe turban as a burden. I want to send a message that if by cutting hair and trimming beard they believe it gives a smart look. They are wrong. Being a Sikh, I walked down the ramp at a national level competition. I stood 1st runner-up there. I mean to say that a complete Sikh is more handsome to those who trimmed or cut their hair,” said Paramdeep Singh, first runner up of Mr. Singh India 2009.

“After the release of the film `Singh is Kinng’, the turban attained more respect in films. If you monitor any of the recent films, it has one character as a Sikh. If they don’t have a Sikh, there is an essence of Punjabi in the film. If, it’s not there, the film flops. A Punjabi touch in the film has become a trend now,” Paramdeep added.

Paramdeep tells how he has been keen on fashion since his school and college days. He used to be a fashion choreographer in many of the fashion shows and also received the best singer award at Mumbai for singing devotional songs.

Despite his busy schedule, Paramdeep regularly recites Kirtan at the gurudwara and many times at home during family functiond. Besides, he has been drawn to theatre.

“I also remained the president of cultural society. No doubt, we shouldn’t run off with our principles. As we stayed in Mumbai for 10 days, we performed dance, did practice on the ramp and even offered prayer at the gurudwara and sung `kirtan’. Our routine was so excellent that we wake up and do fitness exercises in a gym and then offer prayer. That was our routine,” said Paramdeep.

“Besides following strict principles we should also do fitness exercises and participate in the fashion shows, and go for swimming and play sports. This is our right and how can we leave all this?,” said Paramdeep. (ANI)