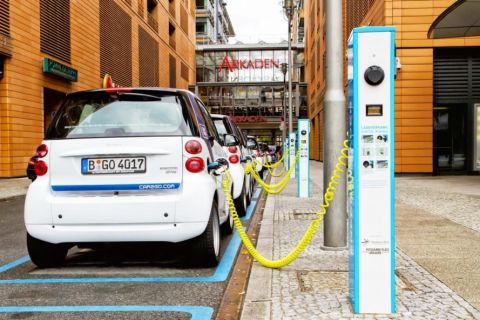 India’s fast-growing automobile market will see a significant rise in the number of electric vehicles (EVs) in the coming years, with more than six million new EV units expected to hit the public roads every year by 2027. According to the India Energy Storage Alliance (IESA), the EV market in India is expected to grow at a compound annual growth rate (CAGR) of 44 per cent between 2020 and 2027 to hit estimated sales of 6.34 million units per annum.

The demand for EVs, particularly commercial EVs like electric buses, will likely be driven by subsidy support from the country’s central government. As per the IESA report, subsidies will play a crucial role in boosting demand for commercial vehicles in the country due to high upfront cost.

The newly released IESA report covers the present day scenario as well as forecast for EVs, EV batteries and the public charging infrastructure market in the world’s second most populous country. With the projected increase in the number of EVs on Indian roads, demand for batteries will also rise substantially over the same time period. Sales of high-speed electric two-wheelers are expected to jump rapidly.

In the report, the IESA states, “In the base case scenario, the EV market is expected to grow at CAGR of 44 per cent between 2020-2027 and is expected to hit 6.34-million-unit annual sales by 2027. With more companies getting FAME-II certification in 2020, sale of high-speed electric two-wheelers is expected to increase rapidly.”

Besides the two-wheeler segment, the electric three-wheeler segment is poised for a significant growth in the coming years as many new markets like Indore and Bhopal have started adopting electric e0-rikshaws.

Last fiscal year, EV sales in the country were recorded at 380,000 units, while the EV battery market was recorded at 5.4GWh during the last fiscal. Highest sales were recorded in the electric two-wheeler segment of the market. The report also predicted that lead-acid battery technology in the electric two-wheeler segment will be fully out of the market within the next 5 years.

Annual demand for EV batteries is projected to grow at a rate of 32 per cent to hit 50 Gigawatt hours (GWh) by 2027. Of that, more than 40GWh will likely be on lithium-ion batteries. The estimated battery market in the country, which was US$580 million in 2019, is projected to grow to US$14.9 billion by 2027.