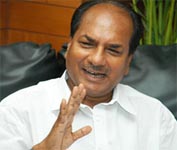 Kochi (Kerala), Feb. 28 : Defence Minister A. K. Antony and Chief of Naval Staff, Admiral Sureesh Mehta, on Saturday strongly rebutted Pakistan Navy Chief Admiral Noman Bashir's contention that the perpetrators of the November 26, 2008 terror attack on Mumbai did not use the sea route from Pakistan to reach India's financial capital.

Speaking on the sidelines of an event to mark the keeling of India's first indigenous aircraft carrier, Antony told ANI: "After 26/11, our investigating agencies carried out thorough investigations and came out with results that indicated that the terrorists used the sea route to attack Mumbai."

In his response, Admiral Mehta said: "Whatever the Pakistan Navy Chief has said in Urdu means that the terrorists could have used another route, and not the sea route via Pakistan. But the (Indian) investigative agencies have produced an excellent document and chargesheet, which brings out that the perpetrators of the Mumbai carnage used the sea route (from Pakistan) to attack Mumbai."

On Friday, Admiral Noman Bashir had said that the terrorists who attacked the city had not used the sea route from Pakistan to reach the city.

"We have no evidence whatsoever that Ajmal Kasab (the lone surviving terrorist) had gone to India from Pakistani territorial waters," Admiral Bashir said.

"The Indian Navy is much larger than ours, and if Ajmal Kasab had gone from here, then what were their Coast Guards doing, and why did they did not stop the terrorists?''''he asked.

On the same day, Union Minister of State for External Affairs Anand Sharma rubbished Admiral Bashir's statement, and urged the authorities in Islamabad to speak in one voice. That view was also endorsed by Union Home Minister P. Chidambaram.

"Pakistan has often spoken in different voices and created this confusion on the investigation in Mumbai attacks," Sharma told reporters.

The Minister also claimed that the identification of the perpetrators of the Mumbai carnage has been completed.

"It is very clear where it was plotted, where the masterminds are, where the perpetrators came from. There has been acknowledgement, even if partial by Pakistan it self. It's not only that India has identified and named, it is the other countries, which had access to information and particularly intercepts," he said.

Pakistan had earlier this month accepted that some part of the Mumbai conspiracy had been planned on its soil.

It acknowledged that the raid had been launched and partly planned from Pakistan. It is conducting its own investigation and has detained several Islamist leaders, including some whom India has named as planners of the attack.

India mounted a diplomatic offensive after the attacks, saying Pakistan was not doing enough to bring the perpetrators to justice or dismantle what it said were militant camps there.

Antony is in Kochi to see India enter an elite club, becoming the fourth country in the world to indigenously build its own aircraft carrier of 40,000 tons plus.

He will lay the keel for country''s first indigenous aircraft carrier or air defence ship (ADS) at the Cochin Shipyard''s construction dock in Kerala today, marking the launch of the first phase of building the 40,000 tonne aircraft carrier.

The ADS is expected to give a major boost to the indigenous defence industry and make the Navy a pure Blue Water Navy.

India joins the US, Russia, and France in building a carrier with a 40,000 ton displacement. The United Kingdom has also built its own aircraft carrier, but not such a huge size.

The project codenamed P-71 will initially cost Rs 3,260 crore, but the amount would increase with the progress of the project and as per requirements.