Modi the Man of the Match 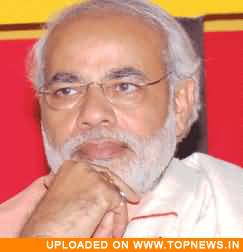 Ahmedabad, Dec 23: In his first reaction after the early trend showed that the BJP is all set to return to power in Gujarat, Chief Minister Narendra Modi said “I was the CM, I will remain the CM. For me CM means Common Man. ”

Modi said this in a SMS. The BJP is leading in over 100 seats out of 182 constituencies. The main opposition Congress party is lagging at around 60 seats.

BJP spokesperson Ravishankar Prasad said "the victory is the victory of the entire BJP of which Modi is the Man of the Match. We are proud of his performance. "

While Modi is all set to become Chief Minister for the third time, party leaders said that he will take oath on December 27.

The Rashtriya Swayamsewak Sangh (RSS), which had distanced itself from organised support to the BJP in the Gujarat Assembly elections, has now come out in his support.

The RSS said that they were helping the Chief Minister all along in the campaign.

“It is not Modi’s victory alone. It is the victory of the BJP central leadership and the cadre base, ” the RSS said.

While the saffron party is set to sweep Modi's bastion North Gujarat and Saurashtra, brushing aside dissidence; it was losing ground in riot-hit Central Gujarat. The party had scored landslide victories in Central Gujarat in the previous elections.

Counting of votes cast in the two-phased elections commenced at 8 a. m. this morning in 37 counting stations amidst tight security with the Congress and the BJP locked in a virtual straight fight.

In the outgoing 182-member House, BJP and Congress had 127 seats and 51 respectively.