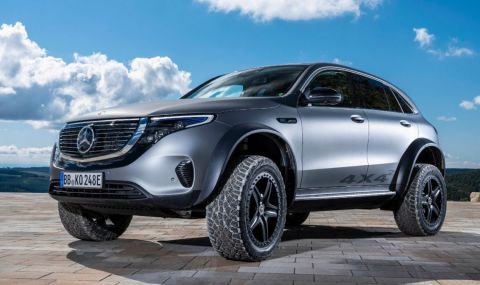 The main difference between EQC 400 and EQC 4×4² Squared is that the concept SUV is capable of riding on higher grounds with much better approach as well as departure angles, thanks to its powerful suspension and axles. The new concept, which is going to be the third member of the carmaker’s 4×4² family, points the way toward an anticipated futuristic electric version of the company’s G-Class off-roader, which is also known as the Mercedes-Benz G-Wagen.

The EQC 4×4² Squared is nearly eight inches higher than the currently available EQC, with ground clearance of 11.5 inches. Featuring shallower approach and departure angles of 31.8 and 33 degrees, respectively, it is better than the current G-Class off-roader that features both shallower approach and departure angles of 28 degrees. A break over angle of 24.2 degrees helps prevent the center of the concept SUV from getting disturbed on obstructions. It can also manage approximately 16 inches of water easily.

The aforementioned impressive specifications could become possible, in part, because of portal axles that place the axle centerline above the wheel hub. It enhances ground clearance, permitting a wider track, providing another set of gears beyond the differential that allows for even lower gearing. Apart from those unique features, the carmaker added 20-inch wheels with 285/50R20 tires, and an off-road mode based on internal-combustion GLC crossover’s software. The brakes can be used to shift torque allocation when starting on loose surface.

Still, the concept vehicle runs on the battery pack provided in the standard EQC SUV. The 80-kWh battery pack powers dual asynchronous electric motors to produce a collective output of 402 hp and 760 Nm of torque.

The EQC 4×4² Squared SUV concept would mark an unexpected twist in Mercedes-Benz’s portfolio as the German carmaker has repeatedly stated to that off-road use was not in any way intended as part of its EQC range.

Meanwhile, the EQC’s launch in the United States has been delayed a number of times, partly due to certain battery supply concerns. Moreover, the company is giving priority to the European market, where it needs to increasingly stricter emissions standards.