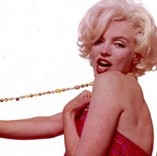 Melbourne, Jan 14 : Researchers have found the "Marilyn Monroe" hormone, which is linked to an hour-glass body shape in women, and also makes the ladies move from one man to another.

According to the US-based research, women who have high levels of oestradoil show elevated confidence and a greater inclination to have sex outside with someone besides their current partner, reports News. com. au.

The ovarian steroid hormone is also associated with having a symmetrical face, large breasts and a low waist-to-hip ratio.

"Marilyn Monroe is actually a really good example of a woman who was almost certainly high in oestradoil," Australian sexologist Dr Frances Quirk said in response to the research.

"She was a classic hour-glass figure and because of her relationship pattern - she was a serial monogamist.

"Her relationships last three or four years or slightly longer, and if you look at the men she had relationships with, they increased in status," the expert added.

To reach the conclusion, the University of Texas study took in 52 young women, aged 17 to 30, and checked their oestradoil levels using a saliva swab.

They were asked to rate themselves on perceived desirability, quizzed on their sexual motivations and also their inclinations relating to their current relationship.

An independent group also assessed photographs of the women to provide an external assessment of their attractiveness.

"High-oestradiol women were considered significantly more physically attractive by themselves and others," the study stated.

"These women reported somewhat lower levels of satisfaction with and commitment to their primary partners, and a significantly greater likelihood ... of becoming acquainted with new potential mates," the research concluded.

The study found while high-oestradiol women reported being "significantly more likely" to have a serious affair, they did not indicate a greater likelihood of having "brief sexual encounters".

Such women favour long-term relationships but are "not easily satisfied by their long-term partners and are especially motivated to become acquainted with other, presumably more desirable, men".

The study has been published in the journal Biology Letters. (ANI)