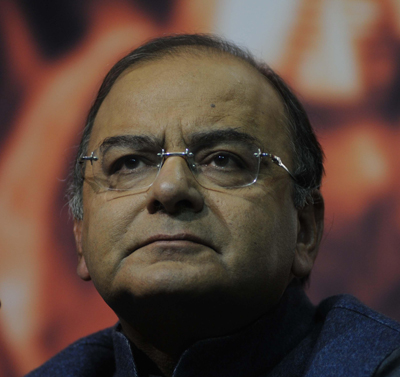 New Delhi, May 10 : Attacking West Bengal Chief Minister Mamata Banerjee, BJP leader Arun Jaitley Saturday said that she was targeting Narendra Modi as she fears a radical shift of 15 percent vote share away from her Trinamool Congress to his party.

In an article on the party's website, Jaitley claimed the Lok Sabha election results in West Bengal may produce a surprise and the Bharatiya Janata Party's vote share would rise next only to that in Uttar Pradesh.

The leader of opposition in the Rajya Sabha said thatBanerjee is an intelligent politician but governance is never her forte and her "poribortan (change)" is "anarchy, booth capturing and encouragement to illegal infiltration".

He said that she was using "choicest adjectives" against Modi, the BJP's prime ministerial candidate, as she apprehends that voters, which had shifted to her during the last assembly polls, were now rooting for Modi.

Jaitley said that conventional wisdom would suggest that traditional rival of Trinamool in West Bengal were the Left parties with the Congress occupying the third spot and the BJP being an also-ran.

"Why then is the BJP the principal target of Didi's attack? Every day she crosses the laxman rekha and uses the choicest adjectives against Narendra Modi," he said.

"Good governance is never her forte. Angry and agitational politics is her strength. A large part of the vote that enabled her to rout the Left in the assembly elections were those aspirational voters who rejected the Left's lack of development politics.

"The bhadralok had all shifted to Didi as a reaction. It is this very vote which now wants to see Narendra Modi as the prime minister," he said.

Jaitley claimed the "cause of Didi's anger and worry" was not New Delhi but West Bengal.

"She fears a radical shift of 15 percent vote share that put her in power in the assembly elections to the BJP," he said, adding that if this happens, Banerjee will be left with "only three votes - the traditional Trinamool supporters, the goons who have moved from the Left to her side and the illegal infiltrators from Bangladesh".

He alleged it is illegal infiltrators from Bangladesh who were "Didi's mainstay", and "for this cause she has to justify infiltration and abuse Modi". (IANS)