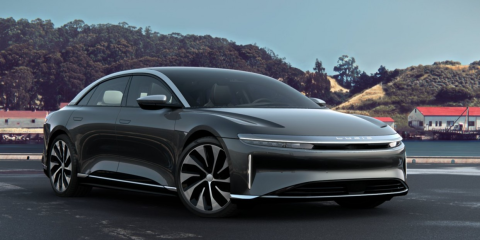 Lucid Group, an American electric vehicle (EV) manufacturer headquartered in Newark, California, has announced that it remains on track to produce 12,000 to 14,000 vehicles in 2022 despite slow output of EVs in the first quarter (Q1) of the year.

Sharing its Q1 performance report, Lucid revealed that it produced 700 EVs and delivered 360 to customers in the first quarter of 2022. In spite of a slow uptick of deliveries, the company reported nearly $57.7 million in revenue.

Lucid has been working for more than one and a half decade to bring luxury performance EVs to the market, but it gained attention only last fall when it started delivering its Dream Edition Air sedan to customers. Deliveries of the all-electric sedan have continued since then, following with the Air Grand Touring.

Like any other EV manufacturer, Lucid has been facing problems in increasing production due to various supply chain constraints and disruptions caused by factors like Russia-Ukraine war and economic slowdown. However, the company has kept its production expectations for 2022 intact.

Market analysts are of the view that there is still plenty of room for optimism as Lucid still enjoys lots of customer demand. According to Lucid CFO Sherry House, the Q1 revenue was mainly driven by higher customer deliveries of Lucid Air sedan. At the end of the quarter, the company had roughly $5.4 billion of cash on hand.

Speaking on the topic, CFO Sherry elaborated, “We continue to have a healthy balance sheet, closing the quarter with nearly $5.4 billion of cash on hand, which we believe is sufficient to fund the Company well into 2023.”

The company has already garnered 30,000 customer reservations. In addition to those reservations, the company has signed a deal with the government of Saudi Arabia, which has promised to purchase up to 100,000 EVs (50k guaranteed) from Lucid over a period next 10 years.

To meet that order, the EV maker will have to set a manufacturing facility in Saudi Arabia. However, the company will have to boost production in the United States, even before thinking about setting up a factory in the West Arabian country.