‘K’ Keeps Coming Back To Us, Says Ekta Kapoor 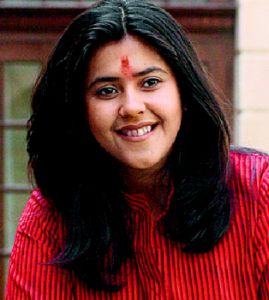 show ‘Mahabharat’ to ‘Kahaani Hamaaray Mahabharat Ki’, which will be aired on 9X channel.

But, the small screen queen said that she had no plans of changing the name of her show earlier.

After all, isn’t it a trend for all Ekta’s shows to start with the letter ‘K’?

But it seems that the producer has changed her mind finally.

While answering the question that why the title of the new show has been changed to ‘Kahaani Hamaaray Mahabharat Ki’, Ekta said, “We could not keep the name of the show Mahabharat as it is a registered title with BR Chopra. In fact, even his show was called BR Chopra’s Mahabharat. I could have kept the title Ekta Kapoor’s Mahabharat but felt that it would really be megalomaniac as it would seem like a copyright on a huge brand.”

“I value Suneeta’s opinion a lot. Surprisingly and luckily, the title with the best sounding aura was Kahaani Hamaaray Mahabharat Ki,” Ekta said.

After Sumeeta, the title was sent to numerologist Sanjay B Jumaani for spelling correction.

And believe it or not, Ekta also stated that she truly desired this to be her initial show, which did not begin with her favorite letter ‘K’.

“I wanted Mahabharat to be the exception as everyone assciates ‘K’ with us now. But I think it’s cool how ‘K’ keeps coming back to us,” she laughs and adds that in the near future, they will surely come out with a title which does not begin with ‘K’. The producer admits that she’s extremely nervous about the show as it’s a huge responsibility. On the other hand, it’s her reality show Kaun Jeetega Bollywood Ka Ticket that’s not giving her the jitters. “It’s the contestants who will be creating the drama on this one so I’m really excited about this show. I’m testing new waters with this show and it’s got me in touch with my fun side,” she concluded.