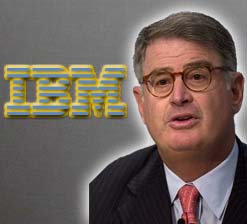 Chairman and CEO Samuel J. Palmisano, in a letter to the stockholders, expressed optimism that IBM is "positioned to lead in the era that lies on the other side of the present crisis."

Saying that IBM is confident of thriving despite the economic downturn, as the company plans to develop money-saving computer services, and spread out further, by the way of the so-called 'cloud computing' concept of delivering software, data and computing power over the Internet.

IBM's fourth-quarter profit and 2009 forecast surpassed the estimates of the analysts, largely due to the endeavors of Palmisano who, ever since he took over the IBM reins as the CEO seven years back, has shifted jobs overseas and focused on more profitable businesses.

Stressing IBM's exposure in the global arena, the recession notwithstanding, Palmisano remarked in the letter: "We will not simply ride out the storm. Rather we will take a long-term view, and go on offense… We entered this turbulent period strong, and we expect to exit it stronger."

Undoubtedly, IBM has broadened its horizons lucratively over the last ten years, emerging from its ancestry as a hardware maker; and has gone on to become the biggest IT services business - vending high end software to corporations and governments worldwide!