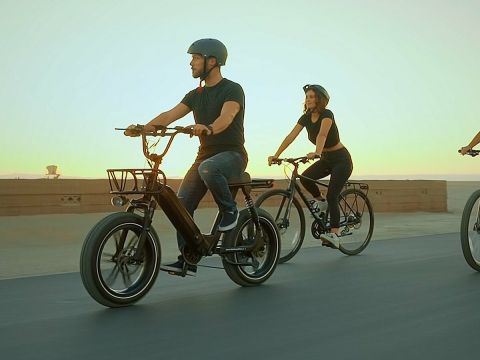 Himiway, an electric bike company founded in 2017, is comparatively a newcomer in the league but it has produced some really high quality & well-crafted e-bikes. The company is popular for its fat tire electric bikes. Its latest EV is the Himiway Escape electric moped, which offers a blend of smooth, calm as well as affordable rides.

The Himiway Escape, which basically looks almost identical to the widely-acclaimed Juiced Scorpion e-moped, is totally different from the Cruiser e-bike. Compared with the Cruiser, the new e-bike is shorter as well as smaller in size. However, it can also be used by tall people. The seat of the e-bike tapers toward the front that helps make it a bit better for pedaling.

It comes equipped with a 750W continuous-rated geared rear hub motor with top speed rated 45 km/h or 28 mph (after unlocking). According to the company’s claims, the Escape’s 48V, 14A Samsung lithium battery offers a range of 32 to 56 km (roughly 20-35 miles) on a single charge. However, it depends on user input.

The 42 kg (92 lb) e-bike is capable of carrying a maximum load of 150 kg (330 lb), thanks to its 6061 aluminum frame that is light as well as strong. Front and rear spring suspension adds to smooth riding. Fork has hydraulic lockout, while Hydraulic disc brakes on 180 mm rotors adds to safety.

Considering all the above-mentioned advantages, the Himiway Escape’s price tag of $1,699 is quite eye-catching. Comparing with other e-bikes available in the market, the Escape has a reasonable price that most people can afford.