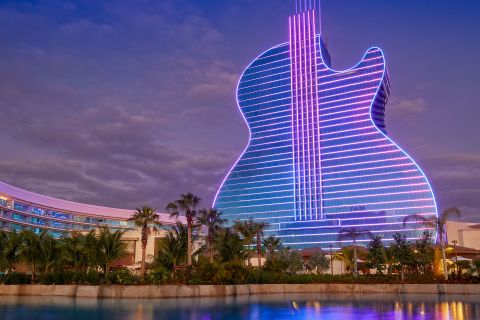 The US Department of the Interior’s Bureau of Indian Affairs has finally agreed to take 320 acres of land into federal trust for the Tejon Indian Tribe’s proposed Hard Rock Hotel & Casino Tejon project in Bakersfield – a city in Kern County of California.

The federally-recognized Tejon Indian Tribe has been seeking to have its acquired land in Bakersfield placed on the Federal Register, which is indispensable to allow any state to enter into a Class III gaming compact with any tribal nation. Signing a Class III gaming compact with the state will allow the tribe to create and operate Las Vegas-style casino equipped with slot machines and table games.

It is interesting to note here that the Tejon Tribe has already signed a Class III gaming compact with California’s Democratic Gov. Gavin Newsom. Signed in June this year, that revenue-sharing gaming deal becomes valid when the U.S. Department of the Interior’s Bureau of Indian Affairs took 320 acres of land into federal trust.

Octavio Escobedo III Chairperson for the Tejon Indian Tribe, said, “The Tejon Tribe now has a homeland where its citizens can work and live together and collectively ensure a safe and economic environment for all.”

The Tejon Indian Tribe was officially established the Golden State’s first Native American reservation in the year of 1853. However, it tribal reservation was dissolved in 1864, and member of the tribal nation were forcibly removed from the territory. Eventually, it was in 2012 when the tribe regained federal recognition. Three years later, it purchased the aforementioned 320 acres of vacant land in Kern County, around twenty miles south of Bakersfield. However, the process of taking the land into federal trust was hampered by changing presidential administrations and the deadly Covid-19 pandemic. Luckily, the federal authorities eventually determined that the tribe has successfully demonstrated its historical ties to the territory in question.

Now, the tribe can start working on its envisioned Hard Rock Hotel & Casino Tejon project. As the name suggests, the Tejon tribe has partnered with Seminole Tribe-owned Hard Rock International (HRI). Groundbreaking on the $600 million casino complex is expected to take place sometime next summer.

The envisioned gambling-friendly property will occupy 52 acres of the tribe’s newly-deemed sovereign territory. The venue will feature an 11-story, 400-room hotel, equipped with a 165,500-square-foot gaming space complete with more than 3,000 slot machines and dozens of table games. In addition, it will offer 13 food and beverage venues, a spa, a fitness center, a pool complex, and a Hard Rock Live entertainment space.