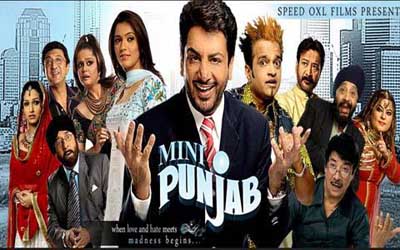 Ludhiana, April 24: Having won millions of hearts across the country and abroad, Punjab’s legendary singer Gurdas Maan has come up with ‘Mini Punjab’, whose music was launched recently here.

The Punjabi film ‘Mini Punjab’ spreads the message of universal brotherhood and educates about being positive, lively and compassionate in today’s life.

`Mini Punjab’ is a Punjab away from Punjab in Mumbai. The film depicts the life of the Punjabi community called `Mini Punjab’, and spreads the message of universal brotherhood.

The film is a potpourri of entertainment, not only for Punjabi audience but also for others.

Having played the role of lead actor in the film, Gurdas Maan, who released the music of the film in Ludhiana, claimed Punjab is still united.

“Border lines cannot divide Punjab. Punjab exists on both sides of the border. It is the same Sher-e-Punjab as it used to be at the time of Maharaja Ranjit Singh. If you want to celebrate the festival of Eid, come meet me and love me. This is the message of our film `Mini Punjab’. I wish that God gives you success in all good deeds and don’t let anything bad happen,” said Gurdas Mann, singer and actor.

In the film, Gurdas Mann has sung six songs in the film and others songs have been sung by Kavita Krishnamurty, Alka Yagnik, Kanth Kaler, Saleem and Labh Janjuwa.

Besides, the music by Jaidev Kumar matches the mood if the film.

Jividha Aashta, who got her first break in silver jubilee Hindi movie `Dil Ashikana Hai’ is a co-star of Gurdas Mann in ‘Mini Punjab’.

“The concept of the film is very unique. It is made on the standards of Hindi films. There are lots of unique things in the film including the use of animation. Cost of animation was very high but we wanted to give it (film) a unique touch,” said Kuljinder Sidhu, producer of Mini Punjab.

Punjabi cinema has got a new lease of life with singer-turned-actors like Gurdas Mann and Harbhajan Mann making high-budget quality Punjabi films.

Many Bollywood Punjabi actors like Jimmy Shergill and Raj Babbar have joined them in making films that target Punjabis settled abroad as well as Hindi cinema audiences.

The market is upbeat with the release of `Mini Punjab’. (ANI)