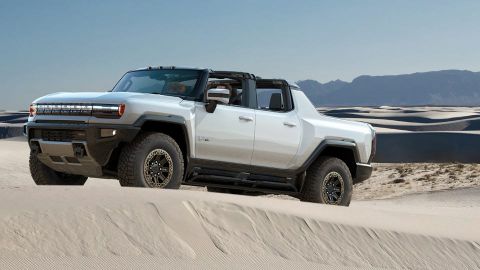 Multinational automotive manufacturer General Motors (GM) has confirmed that it has issued a recall for the 2022 GMC Hummer EV to fix a taillight malfunction. The 2022 GMC Hummer all-electric pickup truck has only recently started hitting the public roads, and it has surprisingly already hit with its very first recall. Fortunately, the recall affects merely 10 vehicles in the United States.

According to the manufacturer’s claims, the recall is not related to the powertrain. Rather, it is related to a taillight malfunction. GM explained that if the taillight becomes inoperative, the vehicle’s various related functions, such as brake light, backup lamp, turn signal, side marker, and clearance lamp, also get disabled. In case it remains completely or partly illuminated, some or all of these tail lamp functions can remain always activated, even after the EV is turned off.

In such as case, the EV fails to comply with the rules and regulations set by Federal Motor Vehicle Safety Standard no. 108 (Lamps, Reflective Devices & Associated Equipment). It is crystal clear that a taillight’s incorrect illumination or its failure to illuminate in time can increase the risk of a crash as it passes incorrect information to other motorists.

The tail light malfunction was first reported on 1st of February by a GM employee based on a couple of field reports. The manufacturer admitted that it was aware of at least three confirmed field complaints about the malfunction, but no crash related to the malfunction was reported.

To fix the glitch, GMC dealers will inspect the taillight assemblies, and replace one or both of them, if necessary. The auto giant also revealed that an initial supply of lamp assemblies have already been made to involved dealers.

Owners of the affected all-electric pickup trucks are receiving a “Check [Right/Left] Rear Turn Lamp” notification, when they attempt to activate the turn signal.

The all-electric GMC Hummer retains the boxy shape of iconic Hummer, but it also brings futuristic elements like a connect headlight bar on the exterior and a 13.4-inch touchscreen for infotainment duties in front of the driver. The infotainment system brings goodies like wireless Apple CarPlay and Android Auto. The pickup is also quite striking in terms of driving range. As per GM’s claims, the three-motor model delivers a range of more than 350 miles on a single charge and recovers nearly 100 miles of range in merely 10 minutes of fast charging.