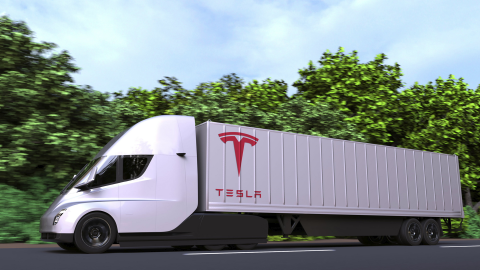 While many commercial entities are eagerly waiting for the launch of the Tesla Semi electric truck, CEO Elon Musk has once again raised doubts on the company’s capacity to produce the all-electric battery-powered commercial vehicle this year. Tesla has witnessed strong interest in its electric truck from many corporate clients.

In summer last year, Musk told Tesla employees that it’s time to bring the much-awaited Tesla Semi electric truck to volume production. However, the billionaire entrepreneur didn’t update the employees with the timeline. Earlier this year, Tesla indicated that the Tesla Semi electric truck could enter production lines by the end of 2021 with limited deliveries to customers.

Throwing cold water on expected production and deliveries of the Tesla Semi, Musk wrote on his Twitter account, “We are too cell-constrained right now, but probably ok next year.”

The production of Tesla Semi has been linked to the production of the company’s new “4680 battery cell” technology that the EV pioneer unveiled during its ‘Battery Day’ event held in September last year.

However, one can’t raise doubts on the company’s intention to produce the Tesla Semi as the project is already going on, with prototypes being spotted several times since the year of 2017.

Now, many entities are optimistic that they could get the Tesla Semi before the end of this year. Frito-Lay, an American subsidiary of PepsiCo, recently said that it expected Tesla to deliver fifteen Semi EVs by the end of 2021. The snacks giant had placed orders for those electric trucks in 2019.

The first batch of Tesla Semi electric trucks was first supposed to hit the market in 2019, but different reasons caused repeated delays in the launch of the truck. Most recently, the COVID-19 pandemic and lack of battery cells caused delay in the project.