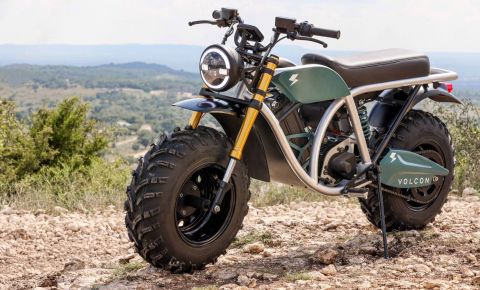 The first batch of Volcon Grunt fat tire electric motorcycles were shipped by the company in September this year, just around eleven months after the official unveiling of the concept.

Volcon’s IPO shares were priced at $5.50 apiece, but the market value of the in-demand shares jumped to $9.01 at opening last Wednesday. Price of the shares kept fluctuating throughout the day. At one point, the shares reached as high as $15.50 apiece. The opening day’s trading closed at a price of $10.86, representing an increase of 97 per cent from the price announced by the company.

Apart from the $7,995 electric motorcycle, Volcon is working on a little Grunt – a sibling in the form of the Volcon Runt. This tiny version of the electric Grunt has been designed for children and young teenagers. For adults, the company is working on two UTVs: the electric Stag and Beast. The Stag has two seats, while the beast has four seats.

The Grunt, which is being produced just outside of Austin in Texas, features seat height of 32-inch and weighs 250 LBS. It has a 25KW electric motor and a 2.3kWh/2kWh battery pack. The battery stores enough power to deliver a range of up to 75 miles between two charges. Its top speed has been pegged at merely 40 mph (64 km/h), but comes loaded with a number of striking features, including app-based navigation and vehicle controls. It is worth noting here that the specs of the electric motorcycle have slightly slipped from the original concept that was introduced by the company late last year. At the time, the company had claimed that it would have a 37-kW electric motor and offer a top speed of 60 mph (96 km/h). However, despite the reductions, the electric two-wheeler retains impressive performance specs.