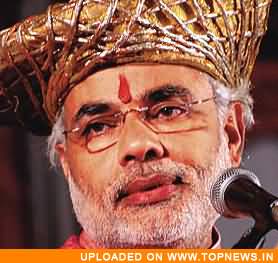 Election Commissioner Navin Chawla said in Ahmedabad on Monday that the commission's legal department is studying Modi's reply that was received on Saturday evening.

"You will know what action the EC proposes to take once we decide on it, " Chief Election Commissioner N. Gopalaswamy said to a question on what action it plans to take against the Chief Minister on his speech on Soharabuddin.

Gopalaswamy dismissed as a "total lie" reports that had appeared in one newspaper regarding differences in the EC over Modi's remarks.

"The Commission's decision to defer action on reply of a notice to Gujarat Chief Minister was unanimous", he added.

Replying to a question on delay in giving notices to Congress President Sonia Gandhi, Gopalaswmay said: "They (the commission) had received six complaints regarding it, but five of them were just cuttings of the speech of Sonia Gandhi. We received a proper complaint against Sonia Gandhi and Digvijay Singh in the last, that is on the sixth of December, " he added.

The three-member EC led by Gopalaswamy was in Ahmedabad to take stock of preparations for the polls for the second phase to be held in North and Central Gujarat on December 16.

However, Gopalaswamy said they have rejected that demand as the ration card does not have a photo.

"The EC had earlier given permission to allow 14 different photo identity proofs which would be valid for voters, " he added.

The EC also received a complaint regarding some voters who have their names in voter's list in Gujarat as also in Mumbai.

"We have given an advertisement in Mumbai newspapers that having names at two places is a punishable offence, " he added.

Meanwhile, the Supreme Court will hear several applications seeking to make Modi a co-accused in the Sohrabuddin Sheikh fake encounter killing. The hearing will take place on Wednesday.

Without issuing notice, a Bench comprising Justices Tarun Chatterjee and Dalveer Bhandari said it was fixing the matter for final hearing on December 12.

The proceeding which lasted barely for five minutes witnessed a heated exchange between the counsel appearing for those seeking action against Modi and those defending the Gujarat Government and the Chief Minister.

Additional Solicitor General Gopal Subramanium, who is assisting the court as an amicus curiae in the matter, began attacking Modi saying when the matter was pending before the apex court "the statement of the Chief Minister is prima-facie a complete interference with the process of justice".

He also placed before the Bench the translated version of the transcript of the speech given by Modi at Mangrol in Gujarat on 4th December and said what he spoke was opposite to what state government's special counsel K T S Tulsi had submitted before this court.

Tulsi, who has preferred not to appear in the matter after Modi's statement, had expressed shock about the fake encounter and had assured the court that the guilty will be punished, the ASG said.

The ASG was joined by senior advocate Dushyant Dave, appearing for Soharabuddin's brother Rubabuddin Sheikh, who said the Chief Minister's statement was "gross contempt of court" and "affront to humanity and the Supreme Court".

"How can he justify to the people (about the fake encounter) when the matter was pending, " Dave said.

However, senior advocates Arun Jaitley and Mukul Rohatgi, opposed their submission and said "what is the purpose of taking the matter today".

"The matter can be taken when the tempers cool down, " Jaitley said and at one time accused Dave of not following the decorum of court by saying that he was giving an election speech and should go to Gujarat.

Dave, shot back and said Jaitley has already reached Gujarat.

Advocate Prashant Bhushan, appearing for lyricist Javed Akhtar, who had sought registration of FIR against Modi for his alleged inflammatory speech, alleged that the Chief Minister was giving practically misleading statement and attempting to polarise the votes between the two communities.

Dave supported him and said Modi's statement amount to mockery of this court as the trial in the case was underway and would have direct bearing on it as it would place the prosecutors in uncomfortable position.

While the two sides were trading charges against each other, the Bench expressed its annoyance saying "we are not accustomed to this".

The application filed by Rubabuddin, Akhtar and others have also sought shifting of the trial of the case outside Gujarat and handing over the investigations to CBI.

They have sought initiation of contempt proceedings against Modi on the ground that his statement justifying the Sohrabuddin's killing contradicted his government's affidavit in the apex court. (ANI with inputs)