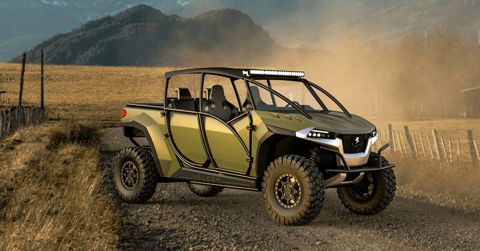 has signed on design firm & automotive industry expert Martin Technologies to work on its upcoming EV projects. Founded in 1996 by automotive engineer Harold Martin, Martin Technologies is a full-service designing, engineering and manufacturing company that has worked with a number of renowned brands like Ford, Jeep, Dodge, General Motors, Toyota, and Nissan.

Martin Technologies commercial collaboration with Volcon has surfaced at a time when the off-road EV manufacturer is working on a new EV, dubbed the Volcon Stag UTV, which is widely expected to be rolled out sometime next year.

The Volcon Stag is the first of two UTVs that were originally announced by the electric powersports manufacturer around a couple of years back in 2020. Making its presence felt in the fast-growing EV space soon after being formed, Volcon also announced plans to develop and deliver an off-road electric motorcycle.

While the brand-new startup has already started shipments of its electric motorcycle, the two UTVs are yet to be developed. The collaboration with Martin Technologies is expected to accelerate the development of those two UTVs. The design firm claims to have more than three decades of experience in automotive designing and manufacturing.

Harold Martin, chairman and chief executive of Martin Technologies, praised the collaboration, saying it would provide them with an opportunity to create the world’s best UTV.

Commenting on collaboration, Martin said, “This is our chance to work with Volcon, the only 100% electric off-road brand to create the greatest UTV ever built. We feel the Stag’s market is the perfect place to prove the toughness and reliability of our EV technologies and Smart Wiring Systems, and we look forward to working with Volcon.”

The top executive added that working with Volcon would help them build best-in-class all-electric off-road UTVs.

The Volcon Stag electric UTV will reportedly be powered by an 80 kW motor and 69 kWh battery pack, which would be powerful enough to deliver a range of up to 150 miles (roughly 241 km) on all kinds of adventurous paths. Two other battery options will likely be 23 kWh and 46 kWh, which will offer enough capacity for local rides while also significantly reducing the price of the UTV.

The Volcon Runt, the company’s electric motorcycle, comes equipped with a 25 KW electric motor and a 2.3kWh/2kWh battery pack, stores enough power to deliver a range of up to 75 miles on a single charge.