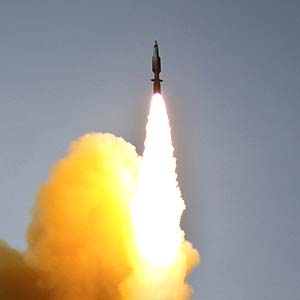 Beijing, Apr. 8: China has asked the United Nations to respond prudently to the Democratic People''s Republic of Korea’s (DPRK) rocket launch, even as the UN Security Council have scheduled a second meeting to discuss what sanctions, if any, can be imposed on that country.

“China is always careful about imposing sanctions. We believe the response of the Security Council should be conducive to the peace and stability of the Korean Peninsula and Northeast Asia as well as the Six-Party Talks," said Foreign Ministry spokeswoman Jiang Yu.

The Security Council failed to agree on a collective response to the launch at an emergency meeting held on Sunday. Council members agreed to continue consultations on the issue.

"This issue also involves the country''s rights to use outer space peacefully. We believe the UN Security Council should respond to that prudently," she said.

"It is clear that the situation does not arouse joy, it arouses concerns," Russian Foreign Minister Sergei Lavrov said Tuesday.

By contrast, Japan and the US called for a strong response.

"If the violation is left as is, the credibility and the authority of the Security Council will be undermined. We are working with countries involved so that the Security Council can together send out a strong message soon," said Japanese Foreign Minister Hirofumi Nakasone.

The US wants to have a strong, effective, coordinated response from the Security Council, the State Department said on Monday.